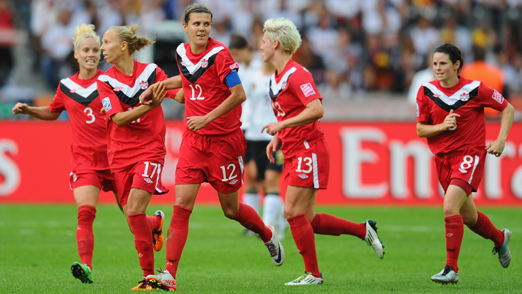 In a 2011 season of the highest highs and the lowest lows for Canada’s Women’s National Team, the squad managed to post an impressive record of 14 wins, four draws and four losses throughout the year’s campaign. Canada’s 14 wins in 24 matches set a new national record.

2011 Yongchuan Cup and 2011 Cyprus Women’s Cup
Canada enjoyed the brightest of starts to 2011, finishing second at the Yongchuan Cup and first at the Cyprus Women’s Cup. In January and March, Canada posted seven wins and one loss, falling only 1:2 to the world’s number-one ranked USA. Highlights included a 1:0 victory over Sweden (with a breath-taking goal by Christine Sinclair) and a 2:0 win over England.

Germany 2011™
Despite a valiant effort in front of 70,000 Germany supporters in the tournament’s opening match against the host side, Canada lost the contest 1:2. The team was never able to recover its form thereafter.

Christine Sinclair scored a remarkable goal in the team’s loss to Germany while playing with a broken nose. She battled on for the rest of the tournament, continuing to play through bumps, bruises, and the uncomfortable vision through a mask built to protect her broken nose.

After opening well against France, things went from bad (a Gaëtane Thiney goal in the 24th minute) to worse (three more France goals in the second half) as Canada was eliminated by the one group opponents whose pre-tournament hype (and international record) was actually better than that of Canada. For Canada’s Big Red, even a final match against African champion Nigeria would not provide redemption: Canada lost all three matches and finished last in its fifth FIFA Women’s World Cup competition.

Herdman immediately guided Canada to a respectable performance against USA in a two-match friendly series before leading the Women’s National Team into competition at Guadalajara 2011™, the Pan American Games.

Canada went undefeated at the tournament and claimed the gold medal after a dramatic final against Brazil. Striker Christine Sinclair popped up with a crucial late equalizer in the match while goalkeeper Karina LeBlanc performed heroics through 120 minutes as well as in the kicks from the penalty mark en-route to a famous Canadian victory.

The Final Word
Canada would go on to close out 2011 on a winning note with a victory in a Women’s International Friendly against Sweden on 22 November as the squad continued its preparations for 2012 CONCACAF Women’s Olympic Qualifying coming up in Vancouver in January.

Sinclair, who again scored the winner against Sweden, finished the year as Canada’s top scorer with 8 international goals in 2011.

John Herdman led Canada on an impressive run of six games unbeaten to close out the 2011 season.