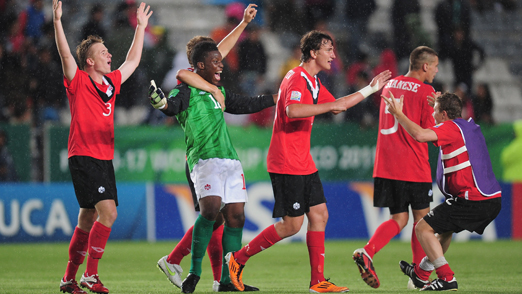 Canada won its first-ever silver medal at the CONCACAF Men’s Under-17 Championship.

Canada’s 2011 youth program was highlighted by a silver-medal performance at the CONCACAF Men’s Under-17 Championship. Along the way, coach Sean Fleming’s group became the first Canadian U-17 team to qualify for a FIFA U-17 World Cup in 16 years.

Overall, it was indeed an important year for the development of Canada’s future stars. For the first time since 2005, the Canadian Soccer Association operated men’s youth projects in six different age categories: the 1989s, 1991s, 1993s, 1994s, 1995s and 1996s. In all, 160 different players took part in more than a dozen projects across the CONCACAF region.

In terms of 2011 official competitions, Canada participated in the CONCACAF Men’s Under-20 Championship, CONCACAF Men’s Under-17 Championship and FIFA U-17 World Cup Mexico 2011. Canada’s young footballers also began early preparations for official men’s and women’s competitions in 2012, 2013 and beyond, all with the hope of one day joining Canada’s national “A” teams.

Men’s U-17
Under the guidance of U-17 coach Fleming, Canada enjoyed a year of historic success during 2011 that culminated in the team winning the country’s first-ever point at a FIFA U-17 World Cup at Mexico 2011. The team played an exciting brand of football that earned the team a silver medal at the CONCACAF Men’s Under-17 Championship.

Canada took part in 13 international matches, posting a record of five wins, three draws and five losses along the way. At the CONCACAF tournament (3-1-1), Canada went an astounding 452 minutes before eventually conceding its first goal in extra time in the final against USA. The Americans went on to win the match, but not before Canada had left is mark on the tournament.

At Mexico 2011, Canada showed well in its first match before suffering a late collapse and loss to Uruguay. The team then made up for that disappointment with a historic 2:2 draw against England only three days later.

Sadi Jalali pulled Canada level at 1-1 in the second half before goalkeeper Quillan Roberts scored a remarkable goal late in the match to earn Canada the 2:2 draw. The point was Canada’s first at a FIFA U-17 World Cup. Roberts, meanwhile, became the first goalkeeper ever to score at a FIFA World Cup.

Canada earned another point in its following match after a 0:0 draw against Rwanda, but the team fell agonizingly short of progressing to the knockout stages.

Men’s U-20
Canada’s U-20 team participated in the 2011 CONCACAF Men’s Under-20 Championship in March and April, but was eliminated after back-to-back losses against 2009 and 2011 CONCACAF U-20 champions Costa Rica and Mexico. Unfortunately, Canada’s 2011 elimination loss to Mexico marked the second competition in a row that Canada was eliminated by the eventual confederation champion.

At the tail end of this year, coach Nick Dasovic was named as the new U-20 coach for Canada’s road to the FIFA U-20 World Cup Turkey 2013. He began early preparations in December with the 1993-age group.

Women’s U-17
Led by U-17 coach Bryan Rosenfeld, Canada began its early preparations for the 2012 CONCACAF Women’s Under-17 Championship. The team took part in four international matches: a draw and loss against Japan and a pair of victories against Mexico.