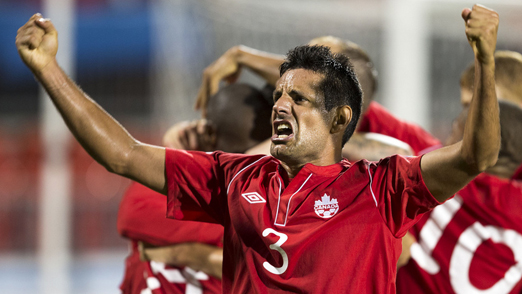 One point short. After getting off to an impressive start in the CONCACAF third round of FIFA World Cup Qualifiers, Canada fell agonizingly short of its goal for 2012 – missing out on a place in the ‘Hex’, the final round of CONCACAF qualifying, by a solitary point.

It had all looked so promising.

After an early stutter, a 3:1 loss to Armenia in a Men’s International Friendly in February, Canada rebounded in June to restart its Brazil 2014 campaign in style.

Stephen Hart’s side turned in a poised performance in 3 June’s Centennial Match celebrating the Canadian Soccer Association’s 100th anniversary as Canada battled a full-strength USA to a 0:0 draw at BMO Field.

Canada displayed some impressive possession football against one of the strongest teams in the region but squandered a number of potential match-winning chances in the second half of the friendly. In the end, Lars Hirschfeld was called upon in the dying stages of the match to make a critical save to keep things at nil-nil.

The Canadians grew in strength following the clash with the Americans and arrived in Havana, Cuba in search of a crucial three points to begin the all-important third round of FIFA World Cup Qualifiers.

On 8 June, Canada battled through the scorching Caribbean sun on a sub-par pitch to defeat Cuba 1:0. After, again, missing a handful of chances in the first half – David Edgar worked some magic down the right flank before delivering a cross to Olivier Occean who buried a header in clinical fashion. Despite Hirschfeld being sent off minutes following the goal, the Canadians would hang on to take maximum points from the opening match of the round.

In retrospect, Canada’s next fixture – a 12 June clash with Honduras – was perhaps the most costly slip-up of the 2014 campaign.

On a tense night a BMO Field against one of its fiercest rivals, Canada ran Honduras ragged but simply could not put the ball in the back of the net. Chance after chance went begging, and at the final whistle, the Canadian staff and players were left visibly exasperated – fully aware of the potential significance of the two points dropped after the 0:0 draw.

Before resuming FIFA World Cup Qualifiers action in September, Canada headed for Florida for a 15 August Men’s International Friendly against Trinidad and Tobago. With a number of the team’s key players just beginning their club seasons in Europe, Hart opted to bring in a youthful side and the manager was rewarded by a number of strong performances by Canada’s up-and-comers. Tosaint Ricketts put Canada 1:0 ahead before Will Johnson converted a late penalty to seal a 2:0 win in the friendly.

Canada returned to qualifiers action on 7 September at BMO Field with a fixture against group leaders Panama. Urged on by a boisterous home crowd in Toronto the Canadians came out flying – but again – Hart’s troops could not capitalize on their chances. The nil-nil stalemate continued well into the second half until a moment of inspiration from Atiba Hutchinson changed the course of the game.

After Simeon Jackson had been fouled outside the area, Hutchinson acted quickly from the set piece, whipping in an early cross to the unmarked Dwayne De Rosario who tapped in from close range. The goal would prove to be the match winner and with the result Canada moved into first place in the group. For De Rosario, the goal held a personal significance as well, as it moved him into first-place as Canada’s all-time leading scorer with 20 international goals.

Halfway through the six-match group schedule, Canada knew that taking four points from its final three games would likely be enough to advance to the final round. Canada next travelled to Panama for the away date against the Central Americans on 11 September.

It proved to be a difficult trip.

From the minute the team arrived in Panama City, the hosts subjected the Canadians to a trying ordeal. In the most shocking of tactics employed by the Panamanians – over a thousand supporters gathered outside of Canada’s team hotel with the explicit aim of keeping the team from getting any sleep ahead of the match the next day. The street party, which was promoted via FEPAFUT’s (the Panamanian federation’s) Twitter account, raged on until four in the morning with music blaring, horns being honked and fireworks being set off only metres from the hotel’s front door.

The scene outside Canada’s hotel in Panama City

The following night, Canada never found its rhythm in front of a packed house at the Estadio Rommel Fernadez – and ultimately Panama would the win the match 2:0 to return to the top of the group.

Entering the final pair of games in the round in October, Canada was again keenly aware that only four points would guarantee passage to the next round.

With a difficult away trip to Honduras beckoning on the final date of round, Canada made full advantage of its final home fixture by thumping Cuba 3:0 on 12 October at BMO Field. Ricketts lashed home an effort form close range in the first half before Will Johnson and Edgar followed up with a pair of second-half markers to seal a much-needed win for Canada.

On the same night in Panama City – Honduras and Panama duelled to a 0:0 draw setting the stage for a climactic finale to the group with simultaneous matches on 16 October.

Canada travelled to San Pedro Sula, Honduras with the knowledge that only a draw would be good enough to ensure qualification for the ‘Hex’.

On a difficult afternoon for Canadian football – the team came nowhere close to a result.

After spurning a pair of chances in the opening stages, Canada capitulated in front of the ravenous Honduras support conceding eight goals in one of the most shocking defeats in the history of the Men’s National Team program. Substitute Iain Hume scored a well-taken free-kick goal in the second half, but it was nowhere near enough as Canada suffered a crushing final blow that extinguished any hopes of returning to the biggest stage in world football.

De Guzman apologizes to Canadian supporters after the loss in Honduras

Despite leading the men’s team to the best record of any coach in the history of the program – Head Coach Stephen Hart resigned two days following the defeat in Honduras.

Tosaint Ricketts and Will Johnson shared top-scoring honours for the season with two goals each.

The 2012 season was also marked by the strongest-ever home support for the team. Canada was buoyed by vastly pro-Canadian crowds at all four of the team’s home matches with an average attendance of 16, 669 for the season at BMO Field.

Canada will return to action in January of 2013 with a pair of Men’s International Friendlies. The Canadians will square off with Denmark in Tucson, AZ on 26 January before heading to Houston, TX for a clash with USA on 29 January.