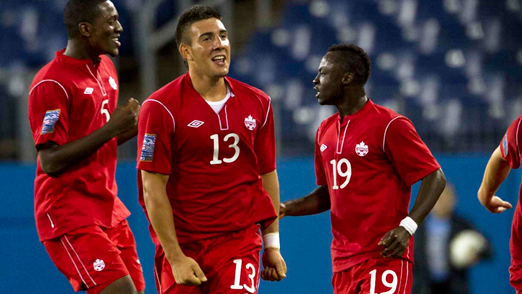 In a year where Canada operated more youth team projects (camps or competitions) than ever before – activity took place across eight different age groups.

The competitive youth season was highlighted by silver-medal finishes for both the Women’s U-17 and Women’s U-20 teams at their respective CONCACAF Championships; with both teams going on to compete in FIFA World Cup youth tournaments.

On the Men’s side, Canada’s U-23’s came to within a single game of qualifying for the Olympic Football Tournament at London 2012 – losing out to eventual gold medal winners Mexico at the final hurdle of qualifying. Canada’s U-20 and U-17 Men’s teams enjoyed a busy year of preparation for their respective CONCACAF and FIFA events in 2013.

Led by head coach Tony Fonseca, now the Association’s Technical Director, Canada turned heads at the 2012 CONCACAF Olympic Qualifying event in USA – making it all the way to the tournament’s semi-final.

Canada was unable to get past Mexico in the semis, losing 3:1. The heartbreaking loss prevented Canada from qualifying for London 2012.

Of note at the tournament, Canada stunned hosts USA by defeating them 2:0 on home turf in Nashville, TN.

Doneil Henry and Lucas Cavallini provided the goals on the night of a memorable derby win for the young Canadians.

With the focus squarely on preparing for February 2013’s CONCACAF U-20 Championship in Puebla, Mexico – Canada’s U-20 prospects took part in a number of camps throughout 2012.

The team’s competitive schedule was perhaps highlighted by a win over rivals USA at the Marbella Cup in Spain – but Nick Dasovic’s squad also finished the year off with an away win in Costa Rica.

Defender Doneil Henry was voted Canada’s Player of the Year in the U-20 age group.

CANM20: Canada gearing up for 2013 CONCACAF U-20 Championship

Led by head coach Andrew Olivieri, Canada’s U-20 Women battled all the way to the final at the 2012 CONCACAF Women’s Championship in Panama.

After posting a perfect record of four wins and zero goals conceded in the tournament to reach the final, Canada actually took an early lead in the final against USA – but would ultimately lose 2:1 in the end.

Canada would then go on to take part in the FIFA U-20 Women’s World Cup Japan 2012. Olivieri’s troops opened the tournament brightly with a 6:0 thumping of Argentina – but a pair of consecutive 2:1 losses to Norway and Korea DPR would send the team crashing out at the conclusion of the group stage.

Goalkeeper Sabrina D’Angelo was voted Canada’s Player of the Year in the U-20 Women’s age group.

Although the Men’s U-18 age group does not compete in any kind of CONCACAF or FIFA youth competitions, the team, led by head coach Rob Gale, is a crucial link between the U-17 and U-20 age groups.

The team recently completed a training camp in California, where it was involved in two tight matches against rivals USA.

Similarly to the U-20 Men, Canada’s U-17 Men’s Team spent 2012 largely in preparation for a crucial 2013 season which will begin with the CONCACAF U-17 Championship in Panama in April.

Head coach Sean Fleming has led his recruits in a number of camps and international matches – recently winning both matches in a two-game series away to Panama in November.

Goalkeeper Marco Carducci was voted as Canada’s Player of the Year in the U-17 Men’s age group.

Just like their U-20 Women’s counterparts, Canada’s Women’s U-17 Team battled all the way to the final at the CONCACAF U-17 Women’s Championship in Guatemala. Similarly to their U-20 sisters – Canada was also defeated in heartbreaking fashion losing 1:0 to USA in the final.

Bryan Rosenfeld’s squad bounced back from the defeat to head to the FIFA U-17 Women’s World Cup Azerbaijan 2012 where the team would make it to the quarter-finals.

Canada drew the opening match of the tournament against Nigeria before defeating Colombia and Azerbaijan to reach the knock-out stages.

Rosenfeld’s young squad suffered another cruel knock-out defeat losing 2:1 to Korea DPR in the quarter-final match to end their run at Azerbaijan 2012.

Midfielder Ashley Lawrence was voted as Canada’s Player of the Year in the U-17 age group.

Under the guidance of head coach David Benning, Canada orchestrated a U-15 talent identification camp in Vaughan, ON in December.

The camp served as preparation event for young players who are likely to make the transition into Canada’s U-17 program in 2013.