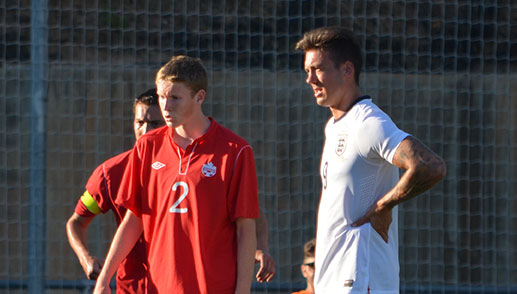 A recap of the year’s para soccer action.

December is the time to reflect back on the year that was. And for Canada’s Para Soccer Team one of the major highlights was the Intercontinental Cup in Spain.

This tournament, held in July-August, was an opportunity to secure an early place in the 2015 World Championships. Although the team failed to finish in the top eight – the necessary requirement for automatic qualification – there will be other opportunities.

More importantly, says Coach Drew Ferguson, the team played well, improving its ranking from 12th to 11th in the world. “Only a few years ago, we were getting beat 0:8 and now we’re capable of beating the top seeds in the world. The players are gaining confidence in themselves as well as the team, so the future looks bright.”

One of these bright spots is fullback Liam Stanley, voted 2013 Canadian Para Soccer Player of the Year. In Spain, he was tasked with covering some of the world’s best attackers and “watching this 16-year-old boy, who weighs something like 54 kilograms, stopping these grown men was awesome,” says Ferguson.

Stanley, together with 15-year-old Samuel Charron, another one of Canada’s up-and-coming athletes, has the potential, according to Fergusson, to join the world’s elite Para Soccer players. “Both have quality, the only thing missing is experience, but this will come in time”. With these young talents and the stability of the current senior squad, Ferguson believes that a podium finish is within sight.

The Para program, however, is always looking for new players. New blood and the creation of a competitive environment is an important part of preparing for top tournaments. “We also need to figure out a way to see our athletes more than just three or four times a year,” says Ferguson.

Looking towards 2014, Ferguson hopes to address these challenges by travelling across the country to spread awareness of the national Para Soccer program. The team will also be holding a series of training camps in Ontario as well as BC. And Canada Soccer has developed a new Long-Term-Player-Development plan, to be rolled out in the New Year, to promote access to facilities and suitable programming for players with disabilities.

Ferguson is hoping that these measures will help generate interest in Para Soccer, especially since Canada is hosting the America’s Cup in the fall of 2014 at the University of Toronto from August 26th – September 7th.

“It’s going to be a great event,” says Ferguson, calling on fans to come out and support his squad, as it, once again, attempts to secure a spot in the 2015 World Championships. “It’s top quality soccer and a chance to see some of the best Para teams in the world.”