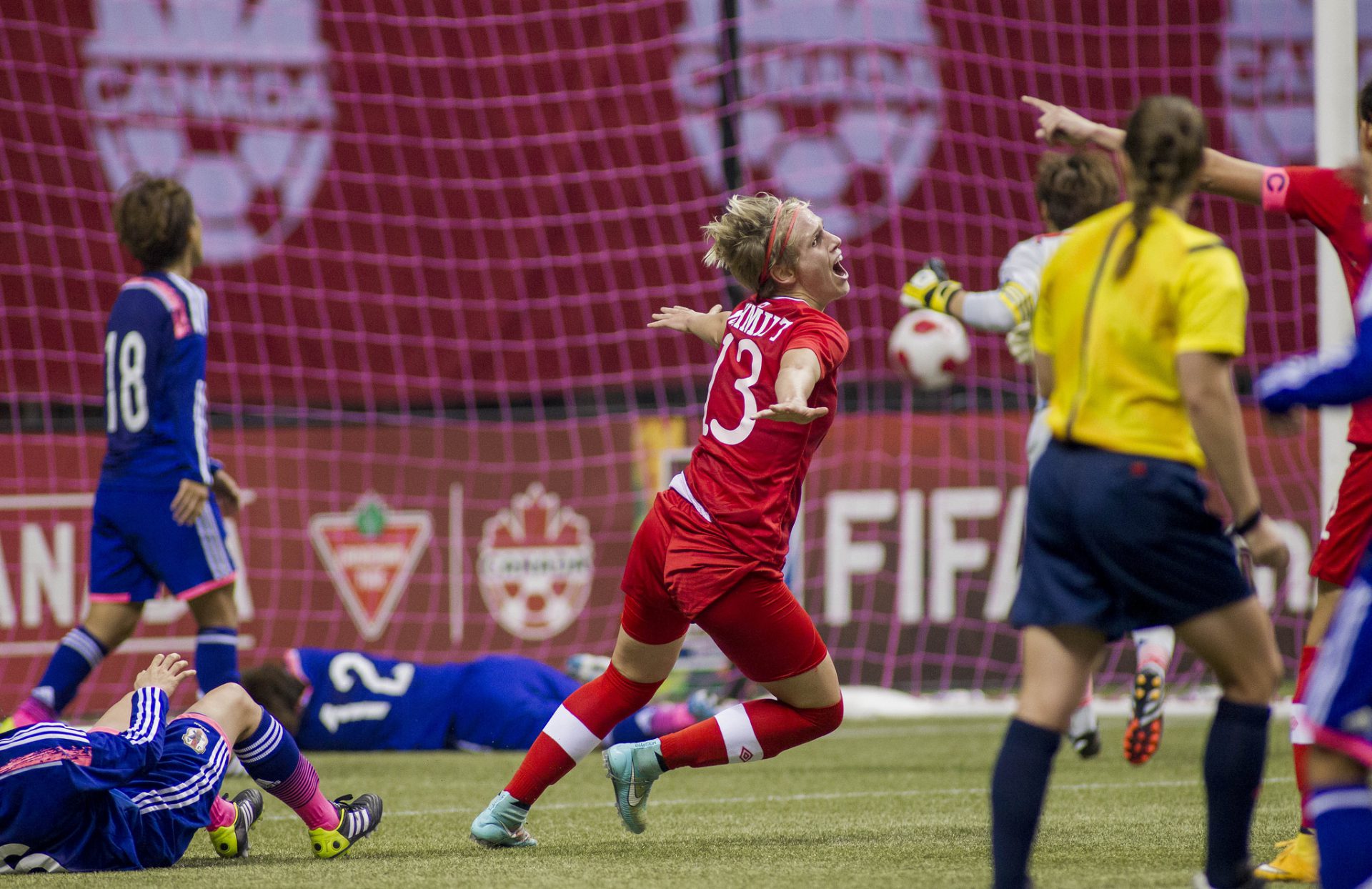 It’s getting down to crunch time for Canada’s Women’s National Team as their FIFA Women’s World Cup Canada 2015™ is just a few months away.

It’s getting down to crunch time for Canada’s Women’s National Team as their FIFA Women’s World Cup Canada 2015™ is just a few months away. With that in mind, the Team had a busy 2014 where they took on some top teams and showed there isn’t much of a gap between the premier teams and Canada.

January
Canada went deep in the heart of Texas to kick off their 2014 calendar as they took on USA at Toyota Stadium in Frisco, Texas, USA. Neither side looked like they were going to find a winner in an even game but the hosts eventually jumped in front in the 79th minute when Sydney Leroux scored and USA won the game 1:0.

March
Next up was the Team’s annual trip to the Mediterranean for the Women’s Cyprus Cup. Canada was in a group with Finland, Italy, and England.

Sophie Schmidt scored twice and a Christine Sinclair shot was turned in for a Finland own goal as Canada got things started with a convincing 3:0 win that was a simply dominant performance from John Herdman’s team.

Two days later Canada was back at it in a physical game against Italy. Diana Matheson got things started with a goal in the 33rd minute and Adriana Leon scored just before halftime. Kaylyn Kyle scored Canada’s third just a few minutes into the second half before Italy got on the board in the 51st minute but that’s all they could get as Canada won 3:1.

They wrapped up the group stage against England but it wasn’t their day at the GSP Stadium, in Nicosia, CYP as Lianne Sanderson scored both goals for England and Canada slipped to a 0:2 defeat and, due to the rules of the tournament, Canada was into the fifth place game against the Republic of Ireland.

In that last game, Canada went down a goal when Ruesha Littlejohn gave Ireland a shock lead in the 13th minute but Canada left it late and had Matheson scored in the 56th minute and Schmidt score with one of the last plays of the game as Canada claimed fifth with a 2:1 victory.

May
For the second time of the year, Canada played USA but this time it was on Canadian soil as they played at Investors Group Field in Winnipeg, MB. Kadeisha Buchanan headed in a corner kick in the 25th minute to bring the 28,225 fans to their feet.

Canada just about held out but Leroux scored her second of the year against Canada and the game ended 1:1.

June
A month later, Canada hosted Germany at BC Place in Vancouver, BC.

Lena Lotzen scored just before the half hour mark as Germany had a one-goal lead heading into halftime. Schmidt got things level in the 54th minute but just over 10 minutes later, Germany won and duly scored a penalty and won the game 2:1.

October
Japan was the final high profile team to visit Canada in a busy year of home games as they played at Commonwealth Stadium in Edmonton, AB and then at BC Place, Vancouver, BC.

The Canadian team has just gotten the Team back together and didn’t have much time to prepare and lost the game 0:3.

Just a few days later Canada found the scoring touch that was lacking a few days earlier. Canada went down a goal on two occasions but each time, Schmidt scored to bring things level. But after Schmidt’s second goal on second half stoppage time, Aya Sameshima scored to make the final 3:2.

November
The Team ended the year in southern California with a pair of games against Sweden.

As 2014 came to an end, Canada put in two confident performances where they controlled large portions of both games against a quality Sweden side.

Jonelle Filigno scored the first game’s only goal on the stroke of halftime at Loyola Marymount University in Santa Monica, California, and Canada were 1:0 winners.

Two days later, the teams were at UCLA in Los Angeles and despite Canada looking the better of the teams, Linda Sembrandt gave Sweden the lead near the hour mark but Christine Sinclair scored her first goal of the year in the 75th minute and the game ended 1:1.

December
Six months to the day to the start of the FIFA Women’s World Cup Canada 2015TM and the trail Canada’s Women’s National Team will have to tread became clear.