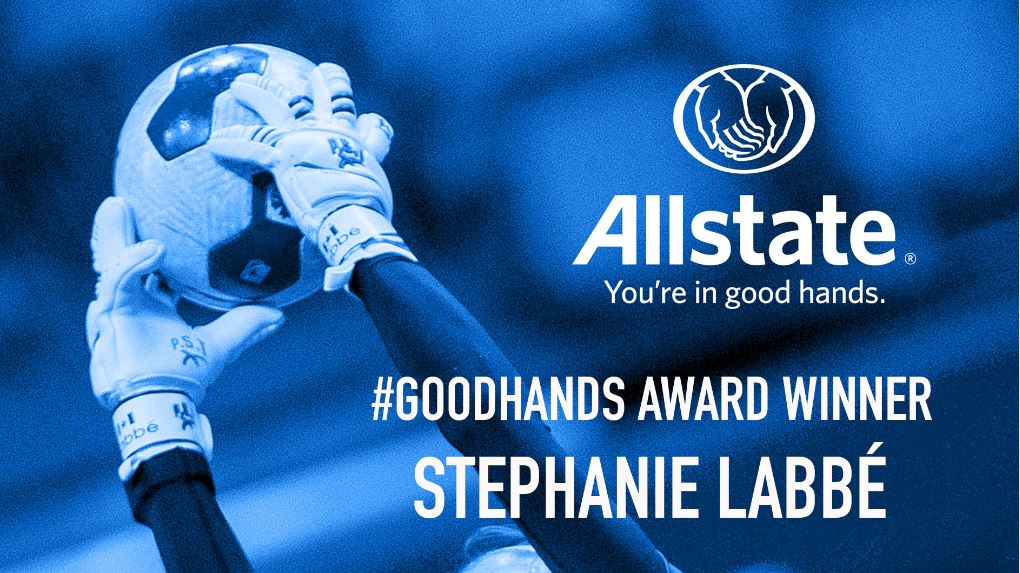 Canadian soccer fans have voted Stephanie Labbé’s leaping save against the USA in an international friendly on November 9 as the 2017 Allstate Canadian National Teams Good Hands® Award. The save came at a critical moment in the match when, in the 39th minute, Lindsay Horan struck a free kick from a dangerous position that would have given the Americans a 2-0 lead. Labbé reacted quickly to tip the dipping ball over the goal, providing the opportunity for Labbé’s Canadian teammates to equalize in the second half. The Allstate Good Hands® Award, which recognizes the top save by a Canadian National Team goalkeeper during international play, was chosen by fans during the online voting period which ran from November 21 through December 3. Allstate will present Labbé with the Good Hands® Award trophy at a future home match.

“In a year where Canada’s Women’s National Team cemented their place as one of the top programs in the world, and Canada’s Men’s National Team delivered back-to-back wins on home soil, our partnership with Canada Soccer continued to flourish,” says Marcelo Regen, Vice-President Allstate Brand, Allstate Insurance Company of Canada. “In the spirit of continued success and growing momentum around our National Teams, on behalf of Allstate, it is my honour to recognize Stephanie Labbé with the Allstate Canada Good Hands® Award. Labbé demonstrated her tremendous skill with an exceptional save during a critical moment in a match against the world’s number one team, USA. Congratulations, you’ve made our country and fans incredibly proud.”

With the presentation of the Canadian National Teams Allstate Good Hands® Award, an exciting second year of partnership between Canada Soccer and Allstate Insurance Company of Canada comes to a close. The multi-year partnership, which was launched in early 2016, has seen Allstate Canada and its Agents lending their support to Canadian soccer at every level, across the country.

The Allstate Good Hands® Award kicks off Canada Soccer’s 2017 awards season, which is celebrating the 25th year of the Canada Soccer Player Awards that were introduced in 1993. This year’s Players of the Year will be announced from December 8-14.

Allstate Insurance Company of Canada is one of the country’s leading producers and distributors of home and auto insurance products, serving Canadians since 1953. The company strives to keep its customers in “Good Hands®” as well as its employees, and is proud to be named a Best Employer in Canada for the sixth consecutive year. Allstate Canada is committed to making a positive difference in the communities in which it operates and has partnered with organizations such as MADD Canada, United Way and Junior Achievement. To learn more about Allstate Canada, visit www.allstate.ca. For safety tips and advice, visit www.goodhandsadvice.ca.