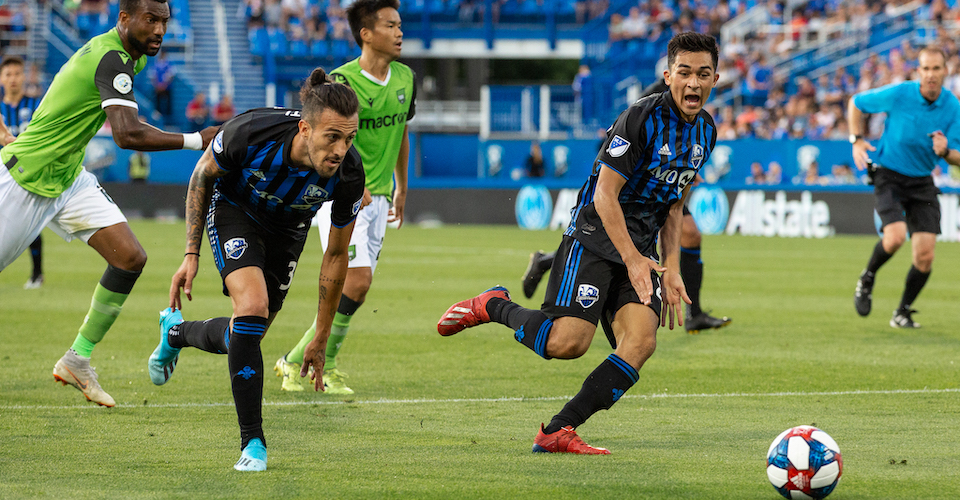 The 2019 Canadian Championship Semi-Finals will feature Ottawa Fury FC against reigning Canadian Champions Toronto FC and Montréal Impact against Calvary FC of Calgary as the final four teams were confirmed following Qualification Round 3 action on 24 July in Ottawa, Montréal and Vancouver.

Ottawa Fury FC advanced on a 5:4 aggregate over HFX Wanderers of Halifax with the two teams drawing 2:2 at TD Place Stadium.  Montreal Impact moved on to the Semi-Finals after defeating York9 FC 1:0 at Saputo Stadium on an aggregate of 3:2. In the final match up of the evening, Calvary FC of Calgary defeated Vancouver Whitecaps FC with a 2:1 victory at BC Place and a 2:1 aggregate to become the only team to advance to the Semi-Finals having played in all three Qualification rounds.

As Canada Soccer’s highest domestic professional soccer competition, Canadian Content is a focus of the competition and since 2017 the Canadian Content rule has required that three eligible Canadian internationals start each match with 63% of the starting line-ups in the 2019 edition featuring Canadians.

The Battle of the North has featured 13 teams from five leagues across five-rounds since the competition kicked off on 15 May.  The final four teams represent Major League Soccer (MLS), United Soccer League (USL) and the Canadian Premier League (CPL) as they enter the Semi-Final and Final rounds to complete the largest and longest Canadian Championship to date.  With Qualification Round 3 now complete and 20 of 24 matches played in the 12th edition of the Canadian Championship, an all-time attendance of over one million for the competition has been reached.

After a wild five-goal opening leg, Ottawa Fury FC of USL and HFX Wanderers FC of the CPL produced another thriller in the second leg. HFX Wanderers scored two first half goals to take a 4:3 aggregate lead with Tomasz Skublak (31’) and Luis Alberto Perea (43’) scoring for Halifax. Ottawa got one back in first-half injury time from Onua Obasi (45’ +1) and Christiano François (66’) scored a second in the second half to earn the 5:4 aggregate victory.

Montréal Impact of MLS and York9 FC of the CPL ended their first-leg matchup combining for four goals in their 2:2 draw. Montreal earned a PK early in the first half of the second leg which Ignacio Piatti (55’) buried and Montreal held on to advance to the Semi-Final on a 3:2 aggregate with their 1:0 victory.

Vancouver Whitecaps FC of MLS and Cavalry FC of the CPL ended in a scoreless draw in their first-leg match. In the second leg, Calvary FC took an early lead through a goal by Jordan Brown (8’). Whitecaps FC were able to pull one back through Hwang Inbeom (67’), however, needing a win to advance Vancouver pressed and Cavalry’s Dominick Zator (72’) was able to put the tie away just minutes later for a 2:1 match and aggregate victory to reach the Semi-Finals representing the CPL in its inaugural season.

The Semi-Finals will kick off on 7 August with Ottawa Fury FC hosting Toronto FC in Ottawa and Montréal Impact hosting Calvary FC of Calgary in Montreal.  The return leg will be played on 14 August in Toronto and Calgary with winners of the Semi-Finals advancing for the opportunity to hoist the Voyageurs Cup and the chance to represent Canada in the Scotiabank Concacaf Champions League. The Final will be played on 18 and 25 September.

Dubbed the Battle of the North, the Championship sets itself apart from all North American professional sports competitions that operate on both sides of the border as the only one to hold an all-Canadian competition that leads to the international stage.  The winner has the opportunity to compete in international competition including the Scotiabank Concacaf Champions League and ultimately the FIFA Club World Cup.

Canadian content is a focus of the competition and since 2017, regulations state that each team must field a minimum of three eligible Canadian Internationals as starters for each match.

Canada Soccer, in partnership with its membership and its partners, provides leadership in the pursuit of excellence in soccer, both at the national and international levels. Canada Soccer not only strives to lead Canada to victory, but also encourages Canadians to a life-long passion for soccer. For more details on Canada Soccer, visit the official website at ww.canadasoccer.com