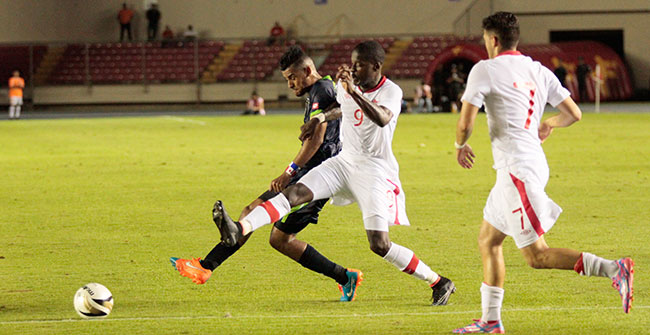 In a World Cup qualifying campaign, a point on the road is generally seen as a positive, no matter the circumstance.

So the fact that Canada’s Men’s National Team picked up a scoreless tie on the road in Central America against Panama, despite their best performance, is certainly cause for measured optimism.

Mentally a result like Tuesday night’s helps the Canadian team build a bit of confidence that in the toughest conditions, they can go in and get a result when it matters.

“It was pretty obvious in the first half that we were a bit sluggish. We weren’t organized very well. It was more of a mental thing that affected our game. At halftime we rectified it,” said captain Julian de Guzman. “We came back in the second half and I thought it was a better performance on the ball and defensively as well. To conclude the camp with a point it’s a good result but it’s obvious the things we have to work on.”

The players and staff were well aware the first half performance wasn’t up to the standards they keep for themselves but the tactical adjustments made at the half were evident as Canada found something that allowed them to move forward and take it to the hosts a bit more.

It’s been quite some time since Canada got a result in Central America so a night where Canada had to scrap for 90 minutes is a small victory. With still so much work to do and so much development to come, the growing mentality that results are possible in Central America is a start.

“Panama was developing a strong press that was very difficult for us to combine. So the first half was very bad. In the second half, we started with better positioning and we started to play well,” said Head Coach Benito Floro. “I consider this another step because at least our pressing was very good.”