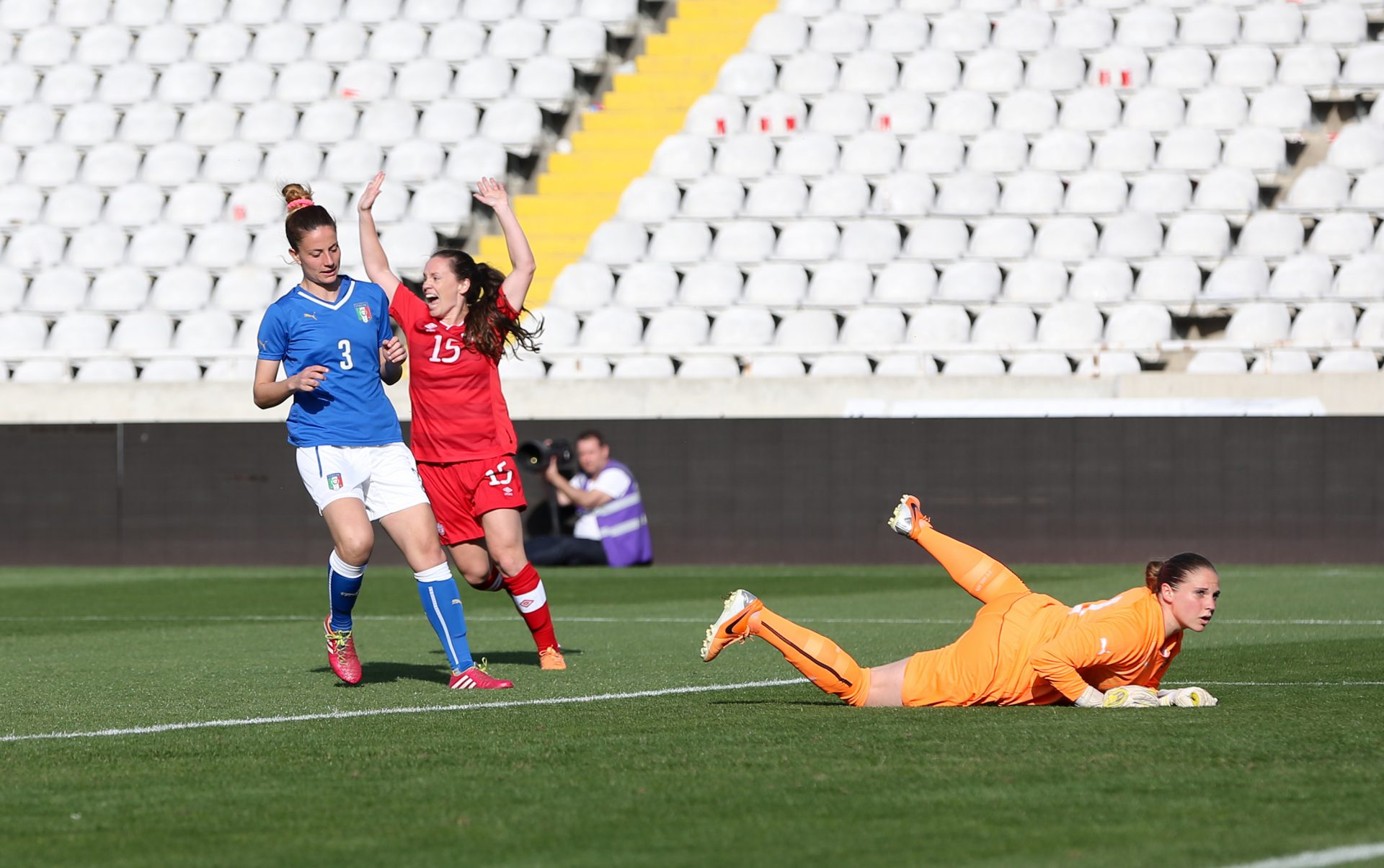 Canada defeated Italy 1:0 in the third group stage match of the Cyprus Women’s Cup to clinch a spot in the final match against England taking place Wednesday, 11 March 2015 in Larnaca.

The first half of Canada’s match against Italy found the Canadian squad fighting to sort out their opponent’s structure. Playing in diamond formation, Italy threw a wrench in the type of game Head Coach John Herdman had been playing for the first two matches of the tournament. A change in the second half made the difference and Canada went up one early in the half with a brilliant strike from full back Allysha Chapman.

“Both teams put each other under immediate pressure, but we started slow,” said Herdman. “I had to change the structure at halftime as the shape we set up with (in the first) didn’t really cope well with their diamond formation. The change at half time changed everything and we were able to get a goal quite quickly.”

Fullback Allysha Chapman scored the winning goal five minutes into the second half, marking her first goal with the Canadian Women’s National Team.

“When it happened, I was in a little bit of shock,” said the defender, Chapman. “I saw Tanc (Melissa Tancredi) coming off the front and she made great spin turn. I was under-lapping her and hoped she could get that touch to me. She saw me and put it through and I just slammed it on net… I wasn’t expecting to score, but I am really happy.”

The backline is critical to Canada’s game, and Herdman was thrilled to see Chapman rise to the occasion and put in a solid offensive effort. “We’ve said the fullbacks are going to be important,” said Herdman. “It’s great to see. That’s the modern fullback and that’s what we need from her (Chapman) and we need more of that from our fullbacks in international games. I’m really proud because she put a great shift in defensively and to get in on the end… and what a wonderful finish it was.”

Canada’s third match of the Cyprus Women’s Cup also deviated from the formula of the teams previous two matches, with Herdman changing up the starting XI by starting Stephanie Labbé in goal, and Adriana Leon and Jonelle Filigno on the front line.

“We wanted to freshen some people up for the final, but we also wanted to keep some consistency,” said Herdman. “And we wanted to give Leon and Filigno – who have been training very well – that opportunity to come in and start a game and get that experience because that’s what this team is about. We’re about the chemistry and it’s important we keep building those partnerships and relationships between the players.”

Canada has been playing well, and Herdman is confident going into the final against England on Wednesday. “It’s part of the plan the team had in place for the Cyprus Women’s Cup, and it is part of the team’s preparations for this summer’s FIFA Women’s World Cup,” he said. “It’s important because it’s another big game and it gives us something absolutely to play for,” he said.

“It’s tournament experience, this is like a knock out game in a World Cup, and we get drawn with England, who is one of the dark horses for this summer’s tournament, so it’s going to be a heck of game.”