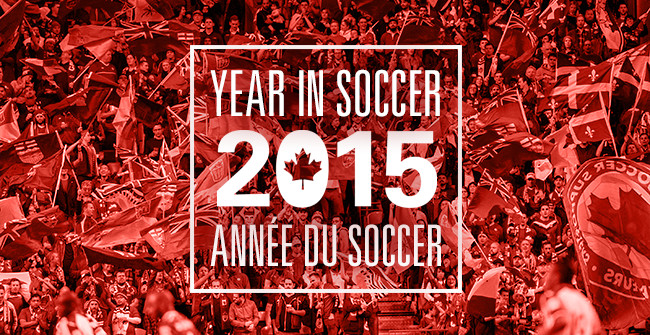 A Year in Soccer: Canadians Set Attendance Milestones in 2015

What was the highlight of the Year of Soccer in Canada? Regardless of competition, team success, or individual achievements, the highlight that brought everything together was the support of their home fans – the proverbial 12th man.

Whether it was Canada standing for the national anthem and scoring winning goals in FIFA competitions on home soil, or Canadian clubs winning their international matches, lifting trophies, and scoring memorable goals on a weekly basis, the football fans were always there in big numbers over the 2015 calendar year.

From Canada’s sporting landscape in 2015, the top-seven one-day attendances for stadium competitions were all soccer matches, with the top-two the CONCACAF Champions League Final in Montréal (61,004) and the FIFA Women’s World Cup Canada 2015 quarter final in Vancouver (54,027). The latter was a record for a Canadian national team match of any sport on home soil.

The FIFA Women’s World Cup Canada 2015 drew a record 1,353,506 cumulative spectators over 52 matches, with an average of 26,539 per match. The average was more than 14 times greater than the average for international women’s football matches during qualifiers in 79 other countries. The total, meanwhile, was greater than any other FIFA competition outside the men’s FIFA World Cup.

In Major League Soccer, 51 matches in Canada drew more than one million cumulative spectators (1,048,254) for an average of 20,554 per home match in either Montréal, Toronto, or Vancouver. Toronto FC had the fourth-highest attendance in MLS with an average of 23,451 per match, including a season-best 30,266 for an all-Canadian clash against Montréal. Then in the MLS playoffs, Vancouver drew 27,837 for their home conference semi finals on 8 November.

In North American Soccer League, Ottawa Fury FC set an NASL post-season attendance record with 9,346 spectators, all of whom were treated to a pair of Tom Heinemann goals in a 2:1 a.e.t. win. Their record was broken one week later with 10,166 attending the Soccer Bowl final in New York.

Following the club season, Canadian supporters capped a terrific season by acting as Canada’s 12th man at the 2018 FIFA World Cup Russia Qualifiers home match in Vancouver on 13 November. Indeed, it was a 1:0 victory celebrated on home soil, capturing a crucial three points to kick off the CONCACAF semi-final stage on Canada’s Road to Russia 2018.

That home win drew 20,108 fans, a record for Canada Soccer’s Men’s National Team in the Province of British Columbia. It is a record that supporters are sure to surpass when Canada continues their Road to Russia on 25 March 2016 against Mexico at BC Place.