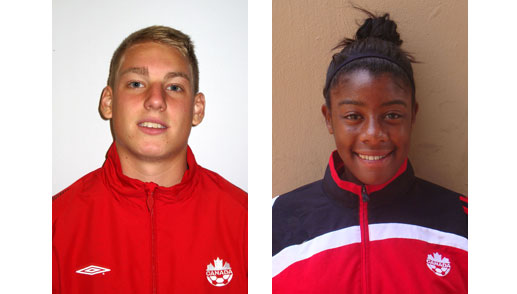 Alderson, Lawrence named Canadian U-17 Players of the Year

Canadian teenagers Bryce Alderson and Ashley Lawrence have been named Canadian U-17 Players of the Year for the 2011 soccer season.

Canadian teenagers Bryce Alderson and Ashley Lawrence have been named Canadian U-17 Players of the Year for the 2011 soccer season. The two stars were honoured in a vote shared by national-team coaches (50%) and Canadian coaches who have taken the Canadian Soccer Association’s national course at the B and A levels (50%).

Alderson was a member of Canada’s men’s U-17 team these past two seasons. In February, he helped Canada qualify for the FIFA U-17 World Cup for the first time in 16 years. The team finished second at the CONCACAF Men’s Under-17 Championship, bringing home a silver medal. The team then received praise for its attacking football at the FIFA U-17 World Cup Mexico 2011 , losing to world silver-medalist Uruguay in the opening match before drawing both England and Rwanda in the group phase.

Over the last two years, the Kitchener, ON midfielder has benefited from more than 90 days in Canada’s youth camps, including a December call up to the newest Canadian U-20 team that will work towards the FIFA U-20 World Cup Turkey 2013. At the club level, Alderson continues to improve with Vancouver Whitecaps FC. A member of the team’s Residency Club, Alderson was signed to the first team (Major League Soccer) on 17 November 2011.

Lawrence is a member of Canada’s women’s U-17 team. She has served as the team’s captain in 2011, including international matches against Japan and (in the coming week) Mexico. She has taken part in the program’s first three camps as the team prepares for next year’s CONCACAF Women’s Under-17 Championship and the FIFA U-17 World Cup Azerbaijan 2012.

Over the last two years, the Caledon East, ON midfielder has benefitted from more than 60 days in Canada’s youth camps, including participation in last year’s FIFA U-17 Women’s World Cup Trinidad and Tobago 2010. In July 2011, Lawrence helped Ontario win the Nutrilite All Stars Girls U-16 competition; in October 2011, she helped her club Erin Mills win the National Championships U-16 Cup.

CANADIAN U-17 PLAYERS OF THE YEAR