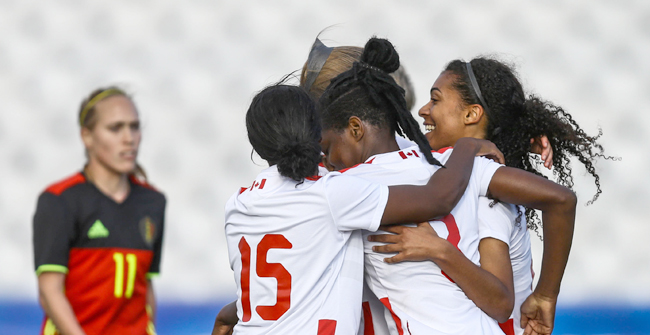 Canada’s Women’s National Team battled to get the result they wanted, and needed, on the second match day of the Algarve Cup: a 1:0 victory over group opponents Belgium.

After fighting a strong headwind throughout the first half, and finding Belgium a highly defensive team determined to keep the score line blank, Canada was forced to push through to the final minutes of the game to finally earn the goal it needed to stay in contention for the final.

After twenty minutes of a determined offensive play, a scramble in front of the net gave Canada their moment when 20-year old Summer Clarke found the ball at her feet just a step off the goal line with only a minute left in regulation time. Clarke, a striker, did what comes natural to her and tapped it in for the win, while making her first appearance for Canada’s Women’s National Team.

“We were pressing really hard into goal and honestly I think like six players on each team touched it before it went in, it was kind of like a big scramble and then it fell at my foot and I just had to tap it in, “ Clarke said after the match. “It was just great work by everyone to push for the whole 90 minutes of that game because it was tough one, so it was a good performance by everyone.”

Head Coach John Herdman made a series of strategic substitutions during the second half to ensure Canada’s front line was fresh, and eager to find the back of the net when the moment finally came.

“It was a good performance today because the weather conditions were tough and the strong wind suited Belgium’s style of play,” said Herdman. “The plan was to wear them down and I think we did that.  The last twenty minutes they just couldn’t cope with our pressure, particularly when we added some real pace on, like Nichelle Prince and Janine Beckie.”

After giving two young players their first appearances as Canadian internationals, Herdman noted the new faces brought on to the roster for the Algarve Cup were making a difference for Canada on the pitch

“I was really happy,” he said. “Clarke and D’Angelo making their first appearances both acquitted themselves very well, and young Gabby Carle had an impressive performance.”

Goalkeeper Sabrina D’Angelo’s first appearance for Canada’s Women’s National team was something she had been hoping for, and the experience was amplified by earning a clean sheet for Canada during her debut.

“I was a little bit nervous in the beginning, but once I got my rhythm in playing it felt good to be out there for sure,” said D’Angelo.   “I got a little bit emotional during the National Anthem knowing it was my first cap, but as a team we got the job done, we stuck to structure and played well, so definitely exciting.”

As Canada defeated Belgium, Iceland was in the process of beating Denmark 4:1, paving the way for an epic match between Iceland and Canada on 7 March which could determine who will go on to the final match.

“We’re back in the tournament – it’s great,” said Herdman. “I thought we were unlucky to get beat off Denmark and we’ve got a result here today and Iceland’s giving us a chance to get to the final of this tournament, so we’ve got to take care of business against them.”

Herdman is confident Canada can put on a winning performance against Iceland in its crucial third match by combining the pace of his younger players with the skill and experience of the team’s veterans. Part of Herdman’s tournament strategy has involved putting Canada’s Captain Christine Sinclair through a measured return to action plan after she suffered a strain at the Olympic Qualifiers. Sinclair started against Belgium, playing the first half, and she’s expected to be an impact player for Canada over the next two matches.

“Today she did 45 minutes in tough conditions against the wind, so we’ll get her fit and healthy for Iceland,” said Herdman. “I’ve had a look at the players over the last couple of days, there have been some players that have impressed, really impressed actually, so we’ll be looking to put a strong line up out to get us into the final. With Iceland, it’s going to be a tough match.  They’re a good team and strong, and we’re going to have to be right on our game but I think it’s doable.”