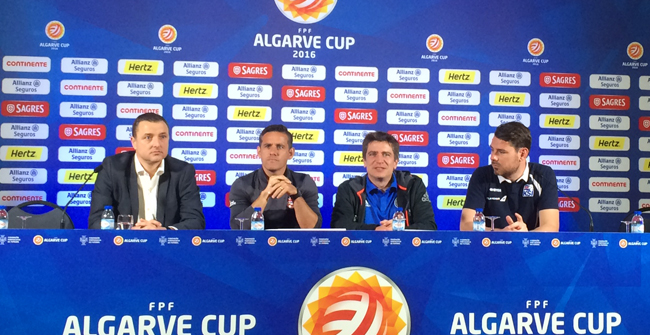 Canada WNT will be seeking out a place in the final match of the Algarve Cup taking place 2-9 March, 2016

Canada’s Women’s National Team will be seeking out a place in the final match of the Algarve Cup taking place 2-9 March, 2016.

Canada will play three group matches against European opponents, starting on Wednesday 2 March against Denmark at 15:00 local (10:00 ET/07:00 PT) before facing Belgium on Friday 4 March 15:00 local (10:00 ET/07:00 PT) and Iceland on 7 March at 18:30 local (13:30 ET/10:00 PT)). Depending on where Canada finishes in the group, Canada will play an opponent from the other group in a rankings match, be it against Brazil, New Zealand, Russia, or host Portugal. Should they finish first in their group, they will advance to the Final on 9 March.

Fans can follow the action through Canada Soccer’s Twitter accounts in English and French and by using the hashtag #CanWNT.

The Algarve Cup will give Canada some much needed exposure to different styles of European play, as Canada faces teams they have never met before in Belgium and Iceland. While Canada’s Women’s National Team has played Denmark four times in the programme’s history, the last was in 2005 and only veterans Christine Sinclair, Melissa Tancredi, Sophie Schmidt and Diana Matheson have minutes against the Danes.

Only two weeks after earning an Olympic berth, and playing a hard fought battle against the world champions USA, Head Coach John Herdman is looking to the Algarve Cup to give some of Canada’s younger players more experience with highly ranked teams, while continuing to assess the squad.

“We are not taking any of these teams for granted,” said Herdman. “Each of the teams in our group can pose some real problems for us, but that is why we are here; we are looking to get some more experience against touch European teams, especially for our younger players.”

The Algarve Cup is the first step on the road to the Rio Olympic Games for Canada, as the Women’s National Team looks to defend and even better its bronze from London 2012.

The Rio Olympic Football Tournament 2016 draw will be held at Maracana stadium in Rio de Janeiro on 14 April 2016. The 12 qualified women’s teams, including hosts Brazil and 2012 champions USA, will be drawn into three groups.