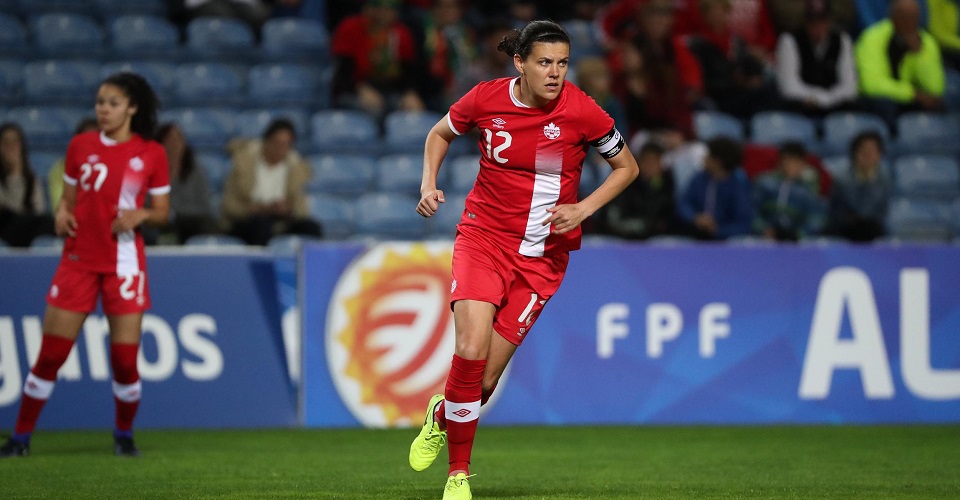 When Canada Soccer’s Women’s National Team play Spain in the championship match of the Algarve Cup 2017, it will be the first time the two teams face each other in the history of women’s football. At a press conference the day prior to the match, both sides reflected on their journey to the Algarve Cup final and their excitement for the match ahead, but neither gave anything away.

The press conference, attended by John Herdman and Sophie Schmidt for Canada and Jorge Vilda and Verónica Boquete for Spain set the stage for the Algarve Cup final set for 18:30 local (13:30 ET/10:30 PT) 8 March at Estadio Algavre in Lagos, Portugal.

“It was our goal to reach the final.  We were the winners of the cup last year and it was our goal again for this tournament,” said Schmidt.  “We needed to win our group, and now that we’ve done that we can focus on the final and we look forward to playing Spain.  We’ve never played them before and we know they are a very technical team, so it’s going to take a strong performance from us to win the match tomorrow.”

Responding in English, Boquete expressed pride at being in the final in Spain’s first appearance at the Algarve Cup.

“It’s our first time here and we’ve been hoping to come to this tournament for so long that for us it’s we’re just happy to be here, but once here we are here to compete,” she said.  “To be in the final and to play a good team like Canada, we are excited about it and we are prepared, but we will also use this final to get better and to grow as a team.”

Coming off a victory in the 2016 Algarve Cup, Canada’s first entry into the tournament since 2003, Herdman understands Spain’s desire to perform.

“I think every team comes here to win the tournament.  It’s exciting to come to an Algarve Cup and we’ve got to treat the tournament with that sort of respect,” said Herdman.  “We came here last year for the first time in my career and coming back again we want to be the first Canadian team to go back to back as Champions of the Algarve Cup, just like we were the first Canadian team to win it.    This tournament means a lot to us.  It’s one of the strongest tournaments in the world and winning here sends a clear message to the world about where Canadian football is at, and where we are taking it.”

Canada’s 2016 Algarve Cup victory came courtesy a 2:1 victory over Brazil in the final match of the women’s international competition. Canada reached the final after winning Group A with six points.  Canada has now improved on its group stage record from the 2016 edition, earning seven points over three games, defeating Denmark and Russia before tying the hosts in the final group stage match.

Adding excitement to the final match day of the 2017 Algarve Cup, fans will have their first chance at individual tickets for the two Women’s National Team home matches in Winnipeg 8 June and Toronto 11 June.

Canada Soccer’s Women’s National Team will return home to play Costa Rica in Winnipeg on 8 June and in Toronto on 11 June. The matches will mark the first meetings between the two nations since Canada defeated Costa Rica in February 2016 at the CONCACAF Olympic Qualifying Tournament, securing Canada a spot at the 2016 Rio Olympic Games.

Individual tickets to the Canada v Costa Rica matches will go on sale 8 March 2017 via Ticketmaster.ca and by phone at 1.855.985.5000. Fans will be able to take advantage of a special ‘Me+3’ offer in select sections for both matches, by purchasing three tickets in the eligible price category, fans will receive the fourth free. Groups of 10 or more are eligible to receive up to 30% off regularly priced tickets. Canadian Supporters have been allocated a number of dedicated sections at both matches, fans wishing to sit in the Canadian supporter sections are encouraged to visit the Voyageurs website for more information and to purchase tickets through thevoyageurs.org. For complete ticket information and to place group ticket requests, visit the event information pages (Winnipeg | Toronto).