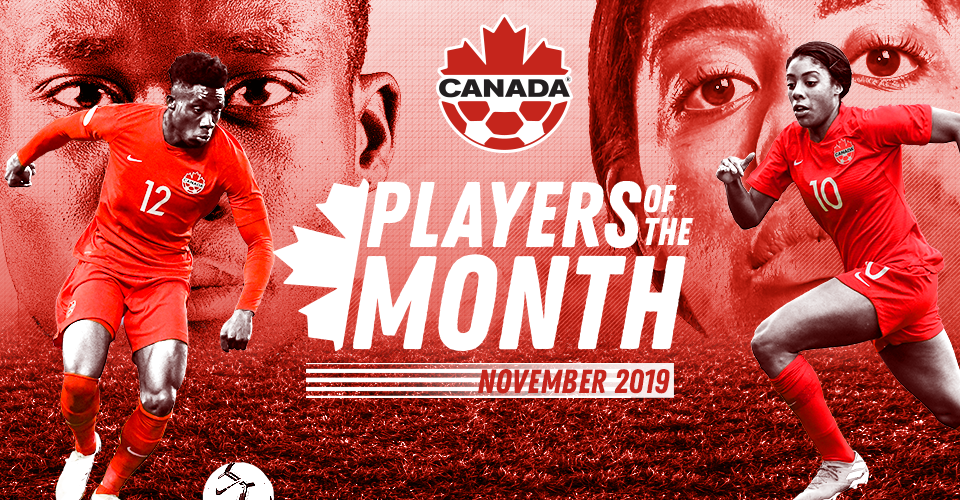 Alphonso Davies and Ashley Lawrence have been named Canada Soccer’s Players of the Month for November 2019. Davies and Lawrence starred for both club and country […]

Alphonso Davies and Ashley Lawrence have been named Canada Soccer’s Players of the Month for November 2019. Davies and Lawrence starred for both club and country during the month, with Davies at FC Bayern Munich in Germany and Lawrence at Paris Saint-Germain FC in France.

Davies started at left back in all six matches for Bayern during the month of November, including back-to-back wins in UEFA Champions League as the German club clinched first place in Group B and earned a spot in the Round of 16.

In France, Lawrence started two of three matches as Paris Saint-Germain maintained second place in the league table. During the international window, she recorded two assists in a 3:0 win over New Zealand, including the Christine Sinclair winner in the first half.

This marks the second time Lawrence wins Player of the Month honours this year, having previously capped the honour in June after the FIFA Women’s World Cup France 2019.

During the month of November, Jonathan David continued his hot streak as he scored in three successive league matches and helped KAA Gent qualify for the next round of UEFA Europa League. From January through November, David has scored 28 goals for club and country. Sinclair, meanwhile, scored her 183rd international goal, just two back of setting a new world record. She will have a chance to set the record at the upcoming 2020 Concacaf Women’s Olympic Qualifying Tournament in January and February.