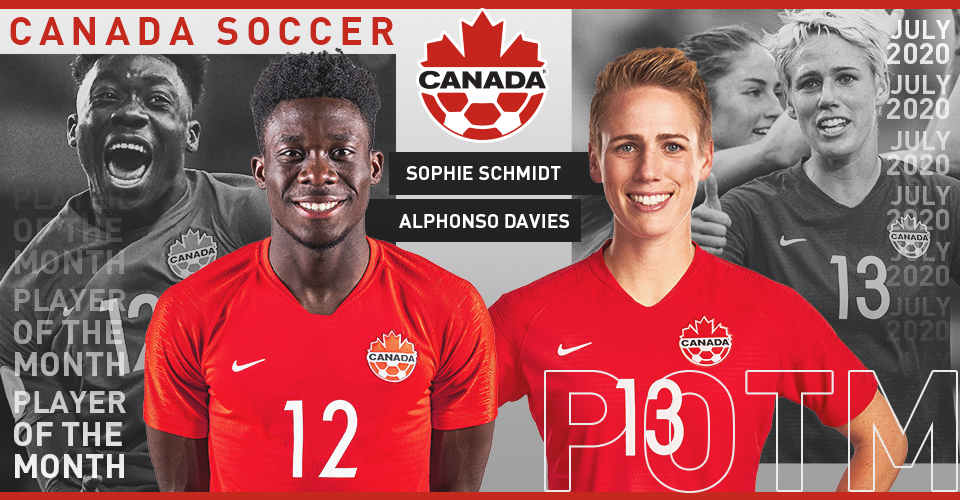 Alphonso Davies and Sophie Schmidt have been named Canada Soccer’s Players of the Month for July 2020. The two Canadian stars both won championships as professional […]

Alphonso Davies and Sophie Schmidt have been named Canada Soccer’s Players of the Month for July 2020. The two Canadian stars both won championships as professional soccer slowly returned to action after many leagues paused or suspended their seasons in response to the global Covid-19 outbreak.

In North America, the National Women’s Soccer League was the first professional team sport that returned to action through its eight-team Challenge Cup series in Utah. Four Canadians were part of the winning Houston Dash side, with special recognition to Nichelle Prince who won her first professional trophy shortly after the sudden passing of her father in June.

Sophie Schmidt earned Player of the Month honours after her header off the crossbar in the semi-finals led to the winning goal and then she scored the winning goal herself from the penalty spot in the NWSL Challenge Cup final. Schmidt became just the second Canadian to score in an NWSL final (after Christine Sinclair in 2013) and the first to score the championship-winning goal.

The 2020 NWSL Challenge Cup final was the first to feature five Canadian players including four starters: Schmidt, Prince and Allysha Chapman for Houston (along with Maegan Kelly on the bench); and rookie Bianca St-Georges for Chicago Red Stars. In all, 13 Canadians took part in the competition, including debutants St-Georges and Évelyne Viens. St-Georges was a standout in the Chicago semi-final with a goal and an assist while goalkeeper Kailen Sheridan was the best goalkeeper of the tournament (Golden Glove) after leading Sky Blue FC to the semi-finals for the first time in seven years.

As football continues to return to action in Europe, several Canadians will be in action in August across domestic Cup competitions and the 2019-20 UEFA Champions League final rounds. Of note, Kadeisha Buchanan (FCF Olympique Lyonnais) and Ashley Lawrence (Paris Saint-Germain) will compete in UEFA Women’s Champions League while Jessie Fleming will make her debut in England after signing her first professional contract with Chelsea FC.

On the heels of winning his second German Bundesliga title in June, Alphonso Davies won his second German Cup title with FC Bayern Munich on 4 July. Davies, the 2019-20 Bundesliga Rookie of the Season, was just the second Canadian to win both German titles in 2019 (after Paul Stalteri in 2004), but now is the first Canadian to win both titles twice. At the end of the Bundesliga season, he set a new league record by registering a speed of 36.5 kilometres per hour during a match.

Following in the footsteps of the NWSL, Major League Soccer got underway with the MLS is Back tournament, with the quarter-finals to run through 1 August, the semi-finals scheduled for 5-6 August, and the Championship final set for 11 August. In the month of July, goalkeeper Thomas Hasal made a remarkable debut for Vancouver Whitecaps FC after he replaced injured teammate Maxime Crépeau in goal, notably posting back-to-back clean sheets in the next two matches.

In Europe, Junior Hoilett scored a pair of goals in July as Cardiff City FC made a run to the Championship playoffs while Atiba Hutchinson scored twice as Beşiktaş JK qualified for 2020-21 UEFA Champions League. Canadian centre back Manjrekar James, meanwhile, won the Danish Superliga title with FC Midtjylland in July while goalkeeper Milan Borjan won the Serbian SuperLiga for the third year in a row in June.