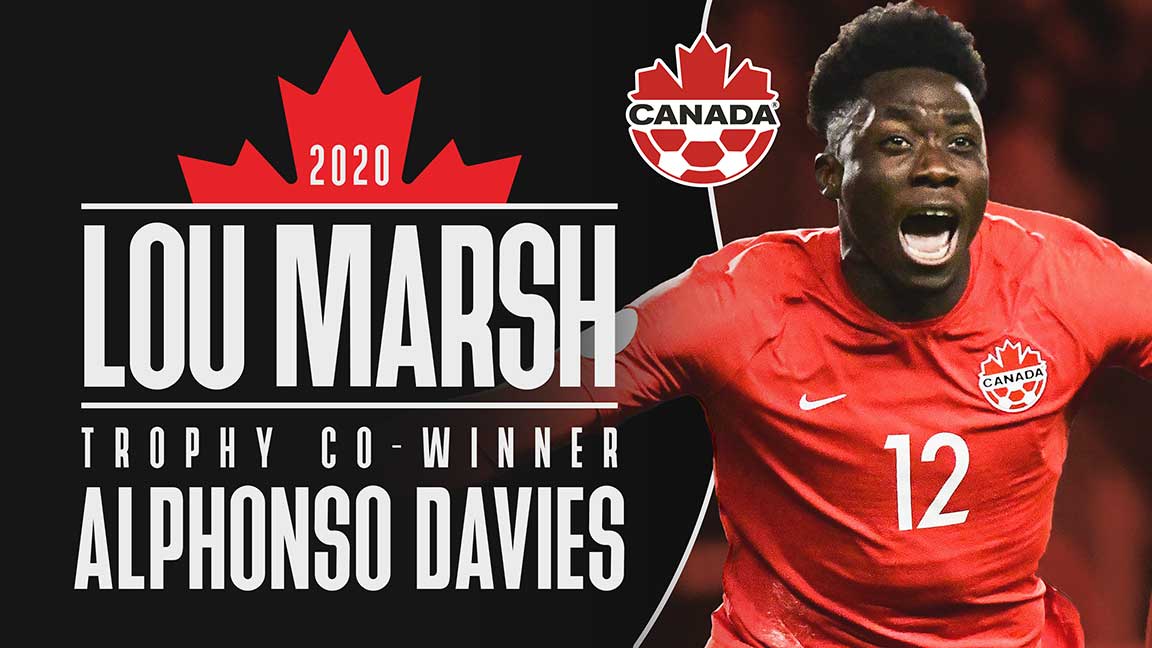 Canada Soccer’s Alphonso Davies has been named a co-winner of the 2020 Lou Marsh Trophy as Canada’s best athlete alongside Laurent Duvernay-Tardif. Davies from Edmonton, Alberta is a member of Canada Soccer’s Men’s National Team and the UEFA Champions League winners FC Bayern München while Duvernay-Tardif from Montréal, Québec was a Super Bowl winner with the Kansas City Chiefs.

“Canada Soccer is proud of everything that Alphonso achieved in 2020 as both a player and a role model for Canadians and young soccer fans around the world,” said Dr. Nick Bontis, Canada Soccer President. “Both Alphonso Davies and Laurent Duvernay-Tardif are worthy co-winners of the Lou Marsh Trophy as they represent the best of Canada this year.”

Davies is the second soccer player to win the Lou Marsh Trophy as Canada’s best athlete of the year, following in the steps of 2012 winner Christine Sinclair. In voting for the 2020 award, both Davies and Duvernay-Tardif finished tied for first place.

“I am truly honoured and humbled to have been selected as the co-winner for the 2020 Lou Marsh Trophy,” said Alphonso Davies. “Canada welcomed me and my family and I am grateful for the opportunity to realize my dream of being a professional football player and representing Canada on the world stage. Congratulations to Laurent Duvernay-Tardif on his selection and for an incredible year and thank you to all of the media who voted for me. In this challenging year, it is nice to know that we were able to make Canadians proud with our accomplishments on and off the field.”

Across the calendar year, Davies was part of FC Bayern’s streaks of 23 consecutive wins (16 February to 24 September 2020) and 32 undefeated matches (11 December 2019 to 24 September 2020), which included the 2019-20 Bundesliga title through 27 June, the DFB-Pokal (German Cup) on 4 July, the UEFA Champions League title on 23 August, and UEFA Super Cup title on 24 September. He lifted his fifth trophy of the year on 30 September when FC Bayern won Germany’s DFL-Supercup.

Davies was the runner up for the UEFA Defender of the Year, shortlisted as a nominee for the UEFA Team of the Year, and the Tuttosport’s prestigious Golden Boy Award for U-21 players. He is a two-time winner of Canada Soccer’s Canadian Player of the Year Award, having previously won the honour in 2018 in the same year he won his first multi-sport award as the Postmedia Male Athlete of the Year.

Early in 2020, Davies, a former refugee, became a Supporter of the United Nations High Commissioner for Refugees, using his platforms and his public profile to raise awareness and fundraise in support of refugees. Davies has an incredible global audience with more than 3.2 million followers on Instagram and 2.9 million followers on TikTok. He was also the most mentioned Canadian athlete on Twitter in 2020.