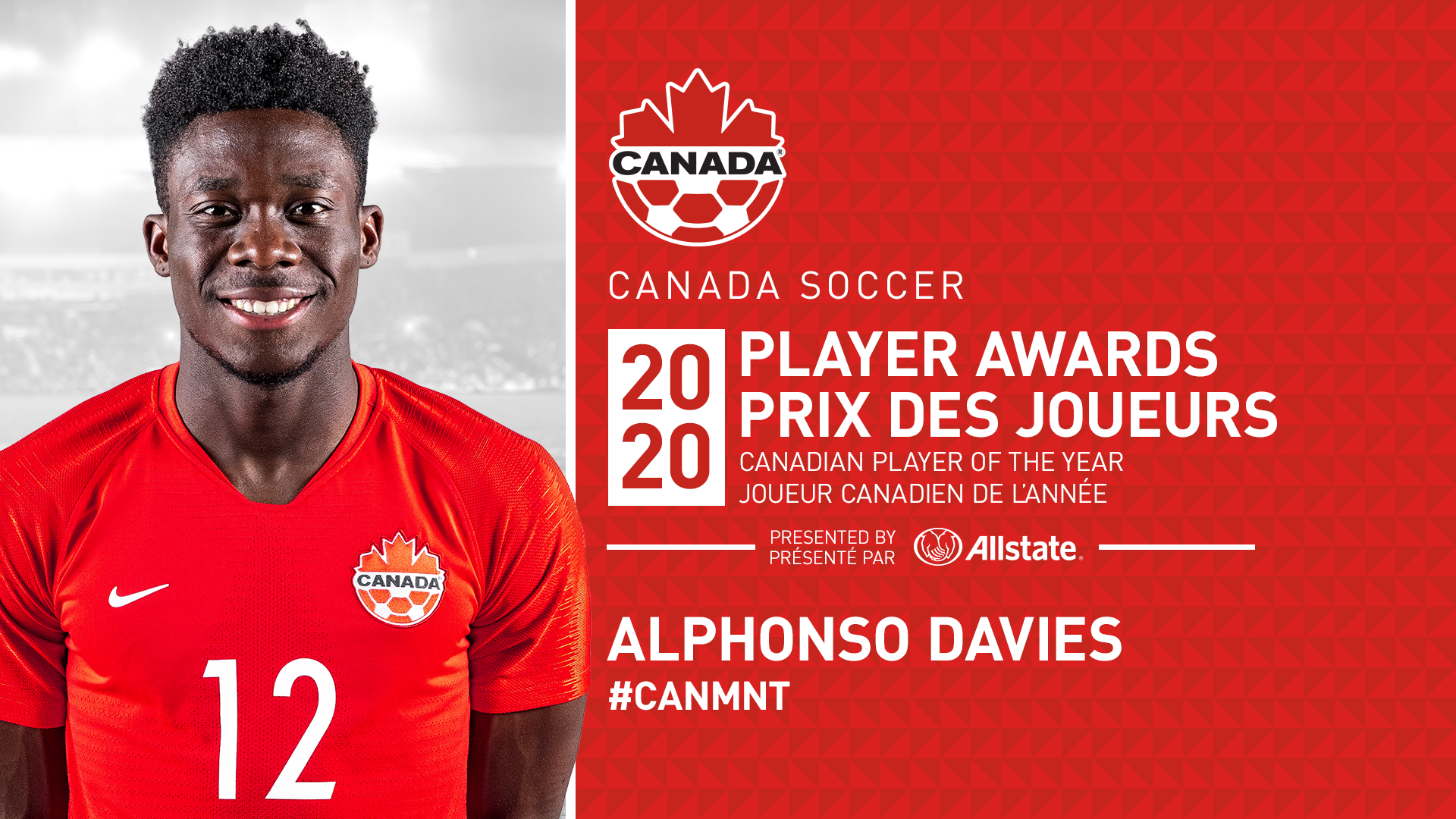 Alphonso Davies from Canada Soccer’s Men’s National Team has been named the 2020 Canadian Player of the Year presented by Allstate. Davies wins the national award for the second time in three seasons after a record-setting year in which he won five club trophies with world renowned FC Bayern München including his first UEFA Champions League title.

Davies was named the 2019-20 Bundesliga Rookie of the Season and was shortlisted as a nominee for the UEFA Team of the Year, the UEFA Defender of the Year, and Tuttosport’s prestigious Golden Boy Award for U-21 players. Across the calendar year, he was part of FC Bayern’s streaks of 23 consecutive wins (16 February to 24 September 2020) and 32 undefeated matches (11 December 2019 to 24 September 2020), which included the 2019-20 Bundesliga title through 27 June, the DFB-Pokal (German Cup) on 4 July, the UEFA Champions League title on 23 August, and UEFA Super Cup title on 24 September. He lifted his fifth trophy of the year on 30 September when FC Bayern won Germany’s DFL-Supercup.

Davies from Edmonton, Alberta was honoured from a vote shared by Canadian media and Canadian coaches, in fact earning the highest voting score just a fraction better than Christine Sinclair’s record from 2012. The Canadian Players of the Year Award presented by Allstate is shared by winners from both Canada Soccer’s Men’s National Team and Women’s National Team, with Davies’ 2020 co-winner to be announced on Friday 4 December.

“To see what Alphonso Davies has accomplished this year is awe inspiring for the next generation of players,” said John Herdman, Canada Soccer’s Men’s National Team Head Coach. “His achievements have raised the flag in our sport higher than anyone else in our lifetime on the men’s side of the game and he has helped put this country as a football country on the world map.

“Alphonso has to be commended for his passion and spirit with which he plays, but also for his ability to connect with people off the field. He is a real ambassador for our sport in Canada and on the global stage.”

Crossing the 2019-20 and 2020-21 seasons from January through October 2020, Davies featured in 33 matches and scored two goals and six assists primarily as a left back. After missing a month through injury, he returned to first-team training on Thursday 3 December. Along the way, he was Canada Soccer’s Player of the Month in February, July and August as well as FC Bayern’s Player of the Month and the Bundesliga’s Rookie of the Month in May (a month in which there was no Canada Soccer award because of the global Covid-19 pandemic). On 16 June 2020, he set an all-time Bundesliga record with the fastest in-match speed at 36.51 km/h.

Before this year, Davies previously won the Canadian Players of the Year Award in 2018, the same year he won the Postmedia Male Athlete of the Year, moved from Vancouver Whitecaps FC to FC Bayern on an MLS-record transfer fee, and spoke at the FIFA Congress on behalf of the United 2026 bid which will bring the FIFA World Cup to Canada, Mexico and USA in 2026. Still only 20 years old, he has already made 17 international “A” appearances for Canada and scored five goals and seven assists. Off the pitch, he has garnered an incredible global audience with more than 3.1 million followers on Instagram and 2.9 million followers on TikTok.

Early in 2020, Davies, a former refugee, became a Supporter of the United Nations High Commissioner for Refugees, using his platforms and his public profile to raise awareness and fundraise in support of refugees. In August, he became an Ambassador for the video game eFootball PES2021 SEASON UPDATE and was featured on the cover alongside Cristiano Ronaldo, Lionel Messi and Marcus Rashford.

As part of the 2020 Canada Soccer Player Awards, Tajon Buchanan and Jade Rose were named Canadian Youth International Players of the Year while Mohamed Farsi was named Canadian Futsal Player of the Year. Maxime Crépeau, meanwhile, was named the 2020 winner of the Allstate Canadian National Teams Good Hands Award.