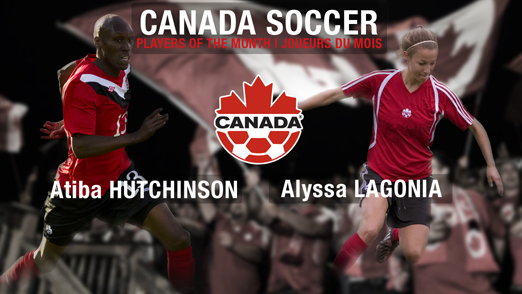 The Canadian Soccer Association is pleased to recognize Atiba Hutchinson and Alyssa Lagonia as the Canada Soccer Players of the Month for April 2012.

In April, Hutchinson helped his club PSV Eindhoven win the KNVB Cup and make a concerted push towards a valuable UEFA Champions League spot via the Dutch Eredivisie standings. In the Dutch Cup final on 8 April, Hutchinson helped his squad win 3-0 over Heracles Almelo in front of 50,000 fans in Rotterdam. Then in four league matches, Hutchinson played every minute as PSV kept pace with second-place Feyenoord. Through to the end of April, PSV remained one point back of Feyenoord, with both teams playing two matches in early May to close out the season. UEFA is expected to qualify only two teams from Netherlands, so PSV will have to remain sharp and jump Feyenoord in the standings by the season finale on 6 May.

Hutchinson has spent 10 seasons with Canada’s national team. Now taking part in his third cycle of FIFA World Cup Qualifiers, Hutchinson will be helping Canada in CONCACAF Round 3 this June, September and October against Cuba, Honduras and Panama. The 29-year old striker from Brampton, ON originally made his football debut at age four in his hometown. He was he was 19 years old when he made his debut for Canada on 18 June 2003.

In April, Lagonia scored in her English Women’s Super League debut with Doncaster Rovers Belles on 9 April. Kicking off the new season, the Canadian midfielder opened the scoring against Chelsea in the 24th minute, converting after a pair of mistakes by the opposing goalkeeper and defender in the penalty area (the match ended in a 1-3 defeat). The eight-team league will continue with fixtures in May and run through mid October, with each team playing 14 matches (a home and away match against each opponent).

Lagonia has spent two seasons with Canada’s national team, but has most recently been busy completing her university career at Wilfrid Laurier University. She has also played for the Ottawa Fury of the W-League. In 2011, Lagonia won the Chantal Navert Memorial Award as Canadian Interuniversity Sport’s women’s soccer player of the year. In 2008 and 2009, Lagonia made four international appearances with Canada, including her debut as a 19-year old on 5 March 2009. Still only 22 years old, Lagonia comes from the Kitchener Minor Soccer Association program and has also played for Canada at the FIFA U-20 World Cup Chile 2008.