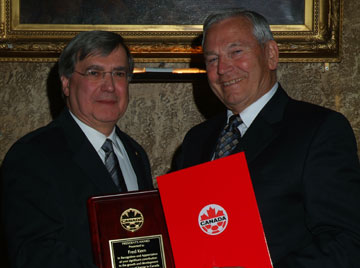 Also bestowed this evening was Life Membership to Mr. Bill Hoyle. Mr. Hoyle had most recently been caretaker of The Soccer Hall of Fame, but also previously served in the position of Ontario Soccer Association president. He was a member of the organising committees to both the 1974 CONCACAF Juvenile Tournament and the FIFA U-16 World Tournament Canada 1987.

Outgoing executive members Mr. Barrett and Mr. Ursini both received the Aubrey Sanford Meritorious Award for their outstanding commitment to soccer in Canada. Mr. Barrett has been involved in soccer for more than 40 years, representing both Newfoundland Labrador and the Canadian Soccer Association. Mr. Barrett has served on a number of committees and has been a Canadian Soccer Association executive member since 2000. Mr Ursini has been involved in soccer for nearly 30 years. He joined the Association’s finance committee in 1992 and became treasurer in 2005.

The Ray Morgan Memorial Award is presented to the referee who has shown the greatest progress at the national and international levels. Ms. Chénard has been on the National List of referees since 2004 and has been on the FIFA Referee list since 2006. She is currently the only female match official operating in Major League Soccer and the Nutrilite Canadian Championship. In 2008, she received international appointments to the 2008 CONCACAF Women’s Olympic Qualification Tournament and 2008 FIFA U-20 Women’s World Cup.

The Canadian Soccer Association congratulates all of its 2009 award recipients.