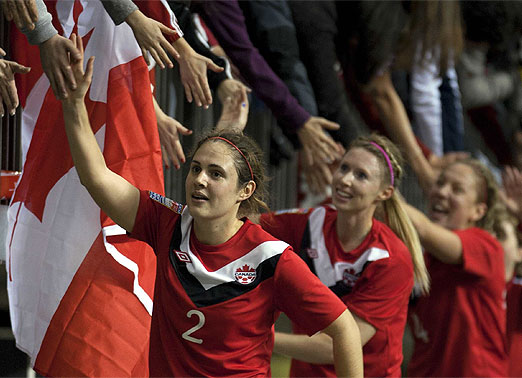 Association thanks fans, partners for successful tournament in Vancouver

“The past 11 days have been an incredible success for the sport of soccer and the Canadian Soccer Association both on and off the pitch,” stated Peter Montopoli, General Secretary of the Canadian Soccer Association.  “We could not be more proud of the Women’s National Team and their world class performance that has resulted in their qualification for London 2012.  The record crowds and nation-wide attention generated during the tournament is indicative of the country’s passion for the beautiful game.”

Eight teams from across the confederation took part in the 2012 CONCACAF Women’s Olympic Qualifying tournament. Both Canada and USA qualified for the London 2012 Women’s Olympic Football Tournament with semi-final victories on Friday night.

The overall attendance record for the tournament will surpass 160,000, including what is expected to be a sold out championship final on Sunday 29 January. The Sunday attendance will also surpass Friday’s record-setting attendance for a CONCACAF Women’s Olympic Qualifying match.

Based on the capacity for the championship final, the attendance on Sunday is expected to be the second-largest ever for a women’s international “A” match in Canada. The standing record is 29,953 fans on 31 August 2003 at Commonwealth Stadium, an international friendly tune-up match before the FIFA Women’s World Cup USA 2003.