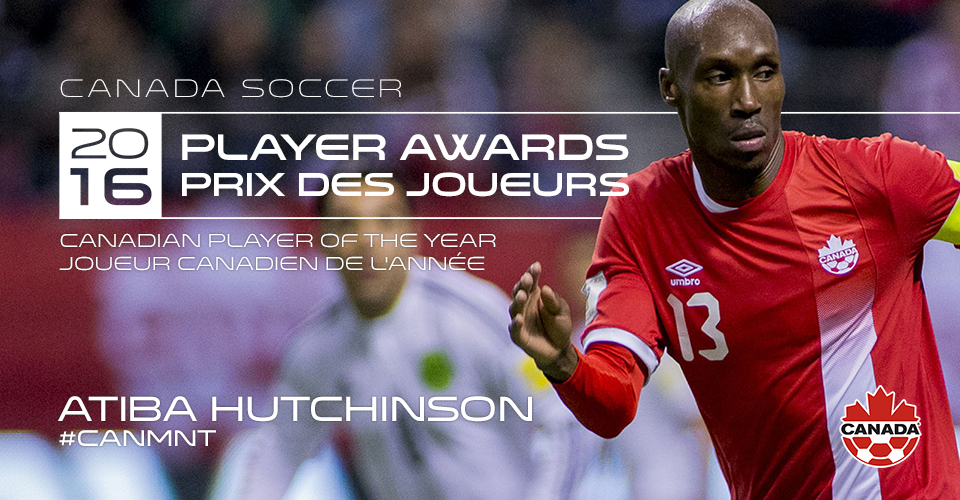 Canada Soccer announced that Atiba Hutchinson has been voted the Men’s National Team winner for the 2016 Canadian Players of the Year award. Hutchinson from Brampton, ON was honoured from a vote shared by Canadian media (50%) and Canadian coaches (50%).

Hutchinson is one of two winners of the 2016 Canadian Players of the Year award. His co-winner from the Women’s National Team is Christine Sinclair.

“Once again, this honour confirms Atiba Hutchinson as one of the most accomplished players Canada has ever produced,” said Michael Findlay, Canada Soccer’s Men’s National Team Interim Head Coach. “On behalf of the entire Canadian soccer family, we extend our congratulations to Atiba.”

Hutchinson was again in top form for both club and country in 2016, notably leading Beşiktaş JK to their first Turkish Süper Lig title in seven years. That 2015-16 title helped Beşiktaş JK qualify for the 2016-17 UEFA Champions League season, with Hutchinson playing every minute and wearing the captain’s armband in home draws against Dynamo Kyiv and SSC Napoli.

With Canada, he was Canada’s master in the midfield in four matches during 2018 FIFA World Cup Russia Qualifiers. In March, he played in front of a Canadian record 54,798 fans at BC Place – the largest crowd for a national team event of any sport ever held in Canada.

“Atiba consistently makes valuable contributions at the international, European, and domestic levels of play,” said Findlay. “These performances have once again positioned him as a much deserved recipient of Canadian Players of the Year award.”

Hutchinson becomes the first Men’s National Team player to win the award five times, having previously won the award in 2010, 2012, 2014, and 2015. He surpasses the record once held by four-time winner Dwayne De Rosario (2005-07 and 2011) while also tying the mark of three consecutive wins.

This marks the 24th year for the Canada Soccer Player Awards. This year’s winners include Para Soccer winner Samuel Charron, U-17 winners Alphonso Davies and Deanne Rose, and U-20 winners Ballou Tabla and Jessie Fleming.