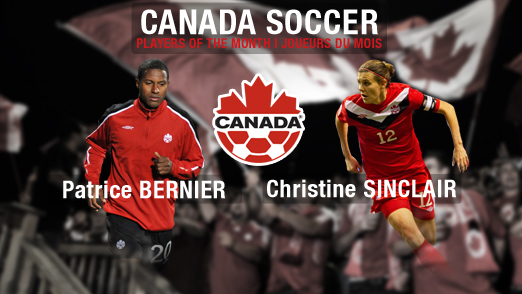 The Canadian Soccer Association is pleased to recognize Patrice Bernier and Christine Sinclair as the Canada Soccer Players of the Month for August 2012.

In August 2012, Patrice Bernier helped Impact Montréal to four consecutive wins in Major League Soccer, scoring three times and three assists in those four matches. His goals came in back-to-back weeks at Stade Saputo, with a goal and assist in a 3:1 win over the San Jose Earthquakes on 18 August and then a pair of goals and an assist in a 3:0 win over D.C. United on 25 August. Bernier also recorded an assist in a 2:0 home win over the Philadelphia Union on 4 August. Along with his four wins in league play, Bernier also helped Canada to a 2:0 win over Trinidad and Tobago in a Men’s International Friendly match on 15 August.

Bernier, in his first MLS season, has been a member of Canada’s national team since 2003. Late last year, he took part in his third cycle of FIFA World Cup Qualifiers. The 32-year old midfielder from Brossard, QC originally played for the Impact from 2000-2002. Already well entrenched in Canada’s national youth system, he was 24 years old when he made his international “A” debut on 15 November 2003.

As for Sinclair, she helped Canada win an Olympic bronze medal in the month of August, in fact scoring four goals in three matches in the knock-out phase against Great Britain, USA and France. The Canadian captain first scored on a free kick in the 2:0 win over Great Britain, a win that moved Canada into the final four of a major women’s competition for the first time since 2003. Then in the semi-final clash at Old Trafford in Manchester, she scored her 11th career hat trick, with one goal scored on the ground and two more scored on headers in the air. Then at last in the bronze-medal win over France, she was part of the offensive push that led to the Diana Matheson goal with just 10 seconds remaining on the referee’s watch.

Sinclair is in her 13th season with Canada’s national team. Along with taking part in her second Women’s Olympic Football Tournament, Sinclair served as Canada’s flag bearer for the closing ceremonies of the London 2012 Olympic Games. She has also represented Canada in three FIFA Women’s World Cups. The 28-year-old forward from Burnaby, BC originally made her football debut at age four with the South Burnaby Metro Club Bees. She was 16 years old when she made her debut for Canada on 12 March 2000.