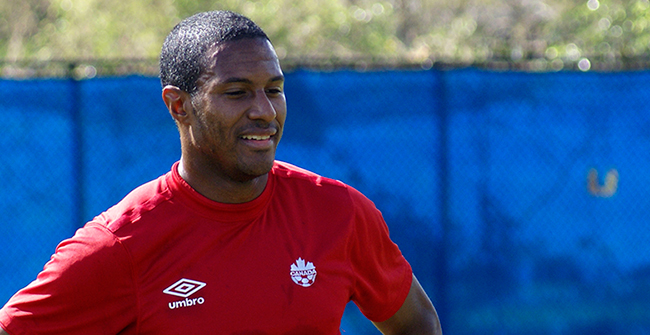 September marks the sixth camp for Canada’s Men’s National Team under Benito Floro but for veteran midfielder Patrice Bernier, this is his first chance to play for the new bench boss.

Bernier, of the Montreal Impact of Major League Soccer, has experienced quite a bit in his first camp since 2012 as he’s seen first hand how Floro’s emphasis on tactics as Canada has had two training sessions in its first few days in camp in Alliston, north of Toronto.

“It’s different. It’s a new coach and it’s a lot of younger faces and a new structure and a new way of training,” said Bernier. “Coming back after two years it’s kind of like a new beginning and I’m just learning what the coach is trying to implement on the structure on this team to play from now on and in the future.”

Bernier said that players had told him to expect more dissection of their play and more video sessions as Floro’s wanted to break down how Canada plays so that every player knows their role as they come into the team.

This camp is also special for Bernier since an appearance in the men’s international friendly on Tuesday against Jamaica at BMO Field would be his 50th appearance for Canada.

His absence over the last two years made it seem like that milestone may have been beyond his reach but continued strong and reliable play in leading the Impact has shown his continued valued to the Canadian program.

“I know the list is not that long for Canada in terms of players that have reached 50 appearances and so to reach that milestone and be a part of that club was my first thought,” said Bernier. “But being back in the mix with some of the guys I’ve seen before was another thing and seeing what the vibe is with this new coach.”