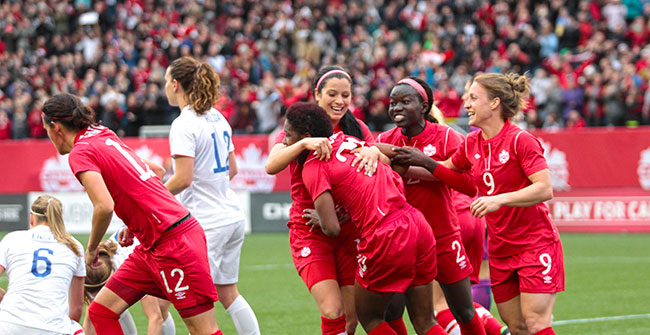 Buchanan could become the best centre back in the world

Going up against some of the biggest names in women’s soccer, Canada’s Women’s National Team had a back line where three of the four defenders were teenagers.

And for 77 minutes, the best team in the world had no answers.

Already an emerging force at the back, Kadeisha Buchanan showed herself at the other end of the field as she put Canada in front late in the first half. On top of that, she took American star striker Abby Wambach largely out of the game for the third game in a row.

Buchanan could become the best centre back in the world—that is, if she isn’t already.

“She’s the Sinclair of defenders,” mused Head Coach John Herdman after the game. “She’s that good. And we’ll find some areas to keep working on but she’s got the chance to be the best player in the world in her position.”

The longer it went on, the more it looked like Canada would pick up their first win over the Americans in 13 years but all credit to the Americans as they’re one resilient group and they find ways to salvage results and in this case, they salvaged a 1:1 draw.

Sydney Leroux was in the right place to score after Rebecca Quinn’s glancing header couldn’t clear an American cross.

But with a team that started with three teenagers and ended the game with four, Canada’s showing that exciting times lie ahead.

Buchanan is still eligible to play this summer at the FIFA U-20 Women’s World Cup Canada 2014 and if she can keep one of the best strikers in the world contained, while providing an offensive force at the other end, one can only imagine what she’s capable of when she suits up at the u-20 level this summer.

“This team’s only going to get better,” said Herdman. “That’s the exciting thing for me. It’s part of the DNA we want to shift in Canada and these girls are leading it.”