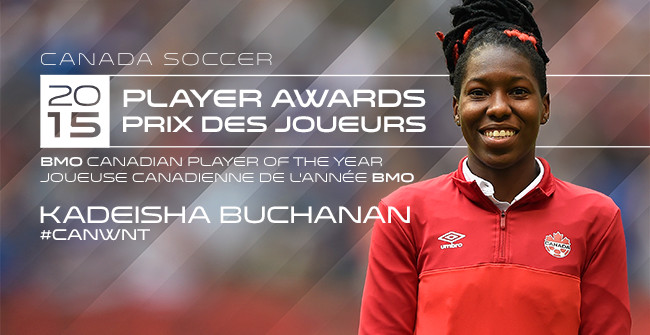 Canada Soccer announced that Kadeisha Buchanan is the female selection for the 2015 BMO Canadian Players of the Year award.

Canada Soccer announced that Kadeisha Buchanan is the female selection for the 2015 BMO Canadian Players of the Year award. The Canadian centre back from Brampton, ON was honoured from a vote shared by Canadian media (50%) and Canadian coaches (50%).

Buchanan is one of two winners of the 2015 BMO Canadian Players of the Year award. Her co-winner (the male selection) will be announced on Friday 18 December.

“Kadeisha has had an incredible year, shining brightly on the world’s biggest stage at the FIFA Women’s World Cup Canada 2015 with millions of Canadians watching,” said Victor Montagliani, Canada Soccer President. “Still only 20 years old, she will be a leader for Canada at the international level for years to come. We congratulate her, her family, her teammates, and all the coaches that have helped her grow as a footballer.”

“We’re thrilled for Kadeisha Buchanan, this year’s winner of the BMO Canadians Player of the Year award, for her leadership both on and off the soccer field,” said Connie Stefankiewicz, Chief Marketing Officer, BMO Financial Group. “Kadeisha exemplifies the spirit of soccer and sport that we foster and celebrate at BMO.”

In 2015, Buchanan was a superstar on the biggest stage on the world – the FIFA Women’s World Cup Canada 2015. With some 20.8 million Canadians watching the record-setting tournament on television, Buchanan won the Best Young Player Award as Canada finished sixth overall in the standings after placing first in Group A. She was named to the tournament’s All-Star Team and, by year’s end, was a top-10 finalist for FIFA Women’s World Player of the Year as the only centre back included on the list.

With her school West Virginia University, Buchanan is a top-three finalist for the MAC Hermann Trophy and an NCAA Division 1 First Team All American. She helped her school reached the Elite Eight of the College Cup.

“Credit to all the people that have supported her on her journey, her parents, her coaching staff from around Ontario and the national squad that have been helping her along the way,” said John Herdman, Canada Soccer’s Women’s National Team Head Coach. “Phenomenal year for such a young player and many good years ahead.”

This marks the first time Buchanan has been named a winner of the BMO Canadian Players of the Year award. She is the seventh different female player to win the award since 1994. Runners up this year included Josée Bélanger (second), Christine Sinclair (third), Erin McLeod (fourth), and Sophie Schmidt (fifth). In all, 10 different players received votes in the women’s category.