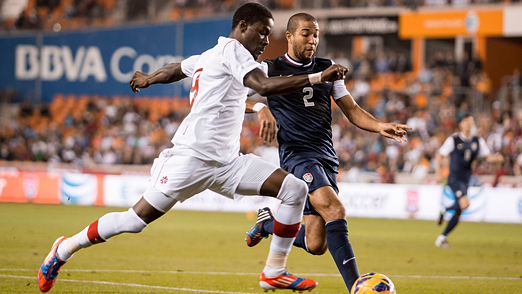 Canada has announced its 18-player roster for the upcoming Men’s International Friendly against Costa Rica on 28 May (18.00 local kick-off) at Commonwealth Stadium in Edmonton, AB.

Tickets to the Canada-Costa Rica match remain available for purchase.

The match, Canada’s first home fixture of the 2013 campaign, will be broadcast nationally in Canada on all four Sportsnet regional channels (Tuesday 28 May, 20.00 ET / 17.00 PT).

Canada’s roster selection for the friendly features a mix of European-based players with a sizeable contingent from MLS clubs as well.

Toronto FC and former Canada U-20 midfielder Jonathan Osorio has earned his first call-up to an MNT camp.

Doneil Henry and Samuel Piette have earned recalls to the senior team after featuring for Canada at February’s CONCACAF U-20 Championship.

“The match against Costa Rica will be a great challenge for this young group,” said Interim Head Coach Colin Miller.

“Hopefully some of these young lads will rise to the occasion and stake a claim for a place at the CONCACAF Gold Cup.

“We are playing at home and we know that means we need to be positive – and I will certainly encourage the boys to be positive. We will not sit back and wait for Costa Rica to come after us.

Miller, who is currently also serving as the Head Coach for NASL side FC Edmonton, noted that it would be a special homecoming for both Ricketts and Edwini-Bonsu who will be in contention to make their first hometown appearance for the Men’s National Team.

“It’s a special occasion for any player to play a national team game in their home city,” said Miller.

“I know they’ll both be very excited by the game.”

The Canada-Costa Rica friendly in Edmonton is part of Canada’s continued preparations for the 2013 CONCACAF Gold Cup to take place in July. Canada will kick-off the tournament on 7 July against Martinique in Pasadena, CA; will then travel to Seattle, WA for an 11 July fixture against Mexico; and will then close-out the group stage with a match against Panama in Denver, CO on 14 July.

It was annonced on Friday 24 May that defender Nik Ledgerwood and midfielder Daniel Haber would be joining the Canada squad in Edmonton.

It was also annoucned that defender Nana Attakora has withdrawn from the camp due to injury.

Ledgerwood, a Canada MNT regular in recent years, and a native of Lethbridge, Alberta will be looking to make his senior debut in his home province.

Haber, meanwhile has earned his first call-up into the Canadian system. The 21-year-old Toronto native played NCAA soccer for Cornell University where he was named Ivy League player of the Year; and was a first-team All-American. Haber currently plays his club football with Maccabi Haifa FC in Israel.