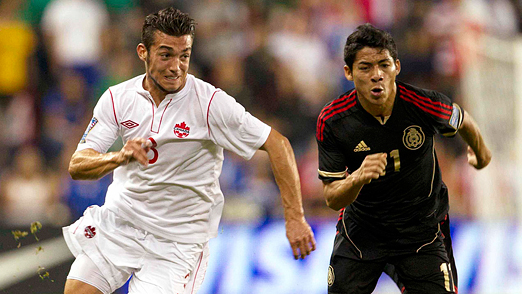 Canada has announced its 22-player roster for the team’s training camp in Oxnard, CA ahead of the 2013 CONCACAF Gold Cup – the confederation’s biennial championship – which is set to kick-off in USA on 7 July.

The Canadian roster offers a blend of youth and experience featuring 13 players that featured in the recent FIFA World Cup Brazil 2014™ Qualifiers campaign; but also eight players that have yet to make their senior competitive debuts for the Men’s National Team.

Canada will announce its final Gold Cup roster (up to 23 players) on Friday 28 June in conjuction with CONCACAF’s announcement of rosters for all 12 teams in the tournament. Players will begin arriving into camp in Oxnard on Wednesday 26 June.

19-year-old midfielder Keven Aleman, who recently signed his first professional contract with Real Valladolid in Spain’s La Liga, has earned his first call-up to the MNT.

Aleman, along with fellow teenaged midfielder Samuel Piette, were both part of Canada’s team at the FIFA U-17 World Cup in Mexico when the last CONCACAF Gold Cup took place in 2011.

As part of the larger youth movement – Russell Teibert, Simon Thomas, Kyle Bekker, Doneil Henry and Jonathan Osorio have all earned call-ups to the Gold Cup squad after making debuts for the MNT in the last calendar year. All five players play their club football domestically in Canada with either Vancouver Whitecaps FC or Toronto FC.

Julian De Guzman, tournament MVP at the 2007 Gold Cup, is the most experienced player in the squad with 64 caps under his belt. De Guzman, who will be taking part in his fifth Gold Cup, has also featured in more editions of the confederation championship than any other Canadian player selected.

Simeon Jackson is the leading scorer on the team with 6 international goals.

The team will gather in Oxnard for a 10-day training camp ahead of the tournament beginning on 26 June.

All of Canada’s matches at the tournament will be broadcast on Sportsnet (channel to be confirmed). CanadaSoccerTV will also be on-site at all venues providing additional coverage.