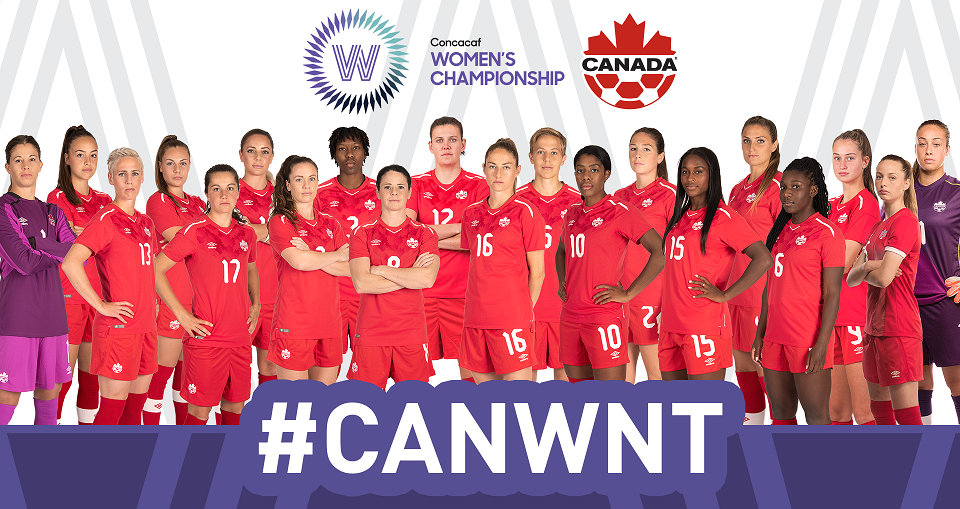 Canada Soccer’s Women’s National Team has arrived in Edinburg, Texas to begin the group stage at the 2018 Concacaf Women’s Championship in its bid to qualify […]

Canada Soccer’s Women’s National Team has arrived in Edinburg, Texas to begin the group stage at the 2018 Concacaf Women’s Championship in its bid to qualify for the FIFA Women’s World Cup France 2019™ taking place next summer.

“We just concluded a training camp here in Texas and the team has come together well, so we are confident going into the group stage that we will perform for Canadian fans,” said Head Coach Kenneth Heiner-Moller.  “We’ve benefited from three big international matches against France, Germany and Brazil as well as the Algarve Cup this year, so this team has had several opportunities to prepare for this important qualification campaign and that is apparent from what we’ve seen since arriving in Texas.”

“We are looking forward to each game of the groups stage because they will all present different challenges for us.  We haven’t had much opportunity to play, or even see Jamaica and Cuba play, so we’ve to a degree been preparing for surprises they could launch at us, but also focusing on being able to execute our game plan against these teams regardless of what they bring to the pitch.  On the other side, we’ve had several experiences with Costa Rica over the past few years, so we’ve been focusing more on how we bring out tactical game plan forward.  We are certainly very excited to get the tournament started so we are really looking forward to the first whistle,” added Heiner-Moller.
Canada, currently ranked 5th in the FIFA World Rankings, will open the tournament against Jamaica, ranked 71st internationally.  Jamaica has yet to register a win against Canada over six matches in international competition, but have shown strong development recently and has just come off a very successful Caribbean tournament to qualify for the Concacaf Women’s Championship, going undefeated.

“Throughout this year Jamaica has been performing better and better, with their best performances against Columbia with a 2:1 win, and a great performance against Costa Rica, where they lost 2:1 on a penalty in the 95th minute,” said Heiner-Moller.  “We are preparing for Jamaica to have some very interesting young players up front with pace and physique, which should make for an exciting opening match!”

Canada’s second group stage match will see them play Cuba who is making its debut in the confederation championship.  Ranked 85th of 177 national teams by FIFA, Cuba is coming into the competition having snagged the final Caribbean spot after finishing third in that qualification tournament. Canada has only played Cuba once, defeating it 2:0 in the 2012 Concacaf Women’s Olympic Qualifying Tournament in Vancouver, BC.

Costa Rica were runners up at the Concacaf Women’s Championship in 2014 and qualified for the FIFA Women’s World Cup Canada 2015™.

Canada recently welcomed Costa Rica to Winnipeg and Toronto in the summer of 2017, taking both games 3:1 and 6:0.
Canada has made one roster change prior to the tournament with Goalkeeper Kailen Sheridan replacing an injured Erin McLeod.
On the other side of the table, USA, Mexico, Panama, and Trinidad and Tobago will compete in Group A in Cary, N.C. The winners of the two semi-final matches on Sunday, 14 October will automatically qualify for the FIFA Women’s World Cup France 2019™, as well as the winners of the 3rd place match scheduled for Wednesday, 17 October.  The final taking place on Wednesday, 17 October, will determine the continental champions.

How to watch Canada’s group stage

In Canada, the Concacaf Women’s Championship will be broadcast by Concacaf on ConcacafGO.com. Direct links to Canada’s games are as follows:

At the last three major women’s tournaments, Canada finished third at the London 2012 Women’s Olympic Football Tournament, sixth at the FIFA Women’s World Cup Canada 2015™, and third at the Rio 2016 Women’s Olympic Football Tournament.
October’s Canada Soccer Action
The month of October features important international competitions for both the Men’s National Team and Women’s National Team as well as the coast-to-coast Toyota National Championships for premier amateur clubs. Canada #CANMNT are at home for a Concacaf Nations League Qualifying match on 16 October while Canada #CANWNT are competing in the Concacaf Women’s Championship from 4-17 October, with a spot at the FIFA Women’s World Cup France 2019 on the line. The Toyota National Championships, meanwhile, cap off the 2018 amateur season in which more than 640 clubs and 12,000 players competed for a chance to win a national title.

As with all home international soccer matches, tickets to Canada’s Tuesday 16 October match in Toronto at BMO Field are available via canadasoccer.com/tickets.

Canada Soccer, in partnership with its membership and its partners, provides leadership in the pursuit of excellence in soccer, both at the national and international levels. Canada Soccer not only strives to lead Canada to victory, but also encourages Canadians to a life-long passion for soccer. For more details on Canada Soccer, visit the official website at canadasoccer.com
For our most recent photographs, please visit our Flickr Photostream.