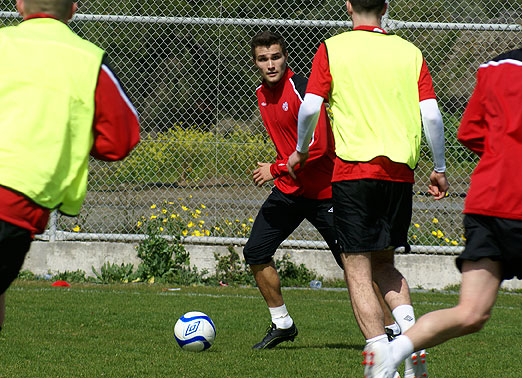 Head coach Hart had 14 players in uniform for first of two training sessions.

Canada opened camp today in the Limassol District of Cyprus, the first of two training sessions in advance of its Men’s International Friendly match against Armenia on 29 February 2012. Head coach Stephen Hart had 14 of his 18 players in camp for the first session, with the remaining three players expected to arrive from their professional clubs in the evening of 27 February. Canada will train again on 28 February before kicking off with Armenia on Wednesday 29 February (19.00 local / 12.00 ET / 09.00 PT).

The Canada-Armenia match will be broadcast live back home in Canada on Sportsnet One. The broadcast will begin with a half-hour pre-match show at 11.30 ET / 08.30 PT.

Sixteen of Canada’s 18 players are currently attached to professional clubs in Europe, with one unattached (on trial in Europe) and one arrived from Canada’s Major League Soccer club Toronto FC. Ten of Canada’s 18 players were in uniform during the last FIFA window in November, while seven others took part in at least one project in the second half of 2011, including regular captain Kevin McKenna who missed two projects because of injuries.

Seventeen-year old midfielder Samuel Piette is the lone debutant in camp with Canada.

“I knew I had a good U-20 camp, but I didn’t think it would go further than that so soon,” said Piette, who was spotted by Hart and the national staff who attended U-20 coach Nick Dasovic’s 1993-birthyear camp in December 2011.

Rob Friend (Eintracht Frankfurt), Atiba Hutchinson (PSV Eindhoven), Simeon Jackson (Norwich City) and Pedro Pacheco (CD Santa Clara) will be the last three players who arrive into the Canadian camp in Cyprus. All three are expected to be in uniform before Tuesday’s training session in Parekklisia.