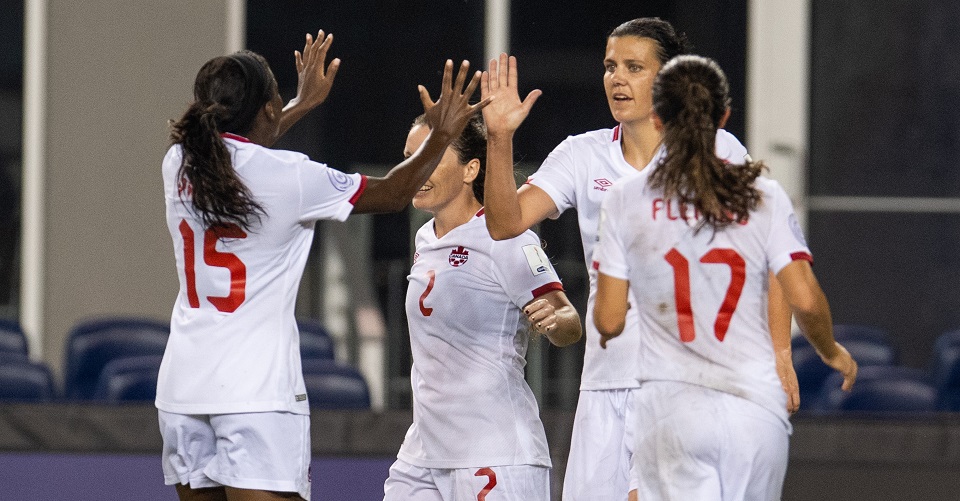 Canada Soccer’s Women’s National Team are one win away from qualifying for the FIFA Women’s World Cup France 2019™. As a result of their 3:1 victory […]

Canada Soccer’s Women’s National Team are one win away from qualifying for the FIFA Women’s World Cup France 2019™. As a result of their 3:1 victory over Costa Rica in their final group stage match, Canada captured first place in Group B at the 2018 Concacaf Women’s Championship.  Canada will now face Panama in the Semi-Final match on 14 October at 17:00 ET/14:00 PT in Frisco, Texas with the winner securing a spot in France and a berth in the Concacaf Women’s Championship Final scheduled for Wednesday 17 October.
“I think we’ve been growing in this tournament on our performance. I think tonight was a difficult opponent, they have class players on the pitch. I think we nullified them very well when we were defending,” said Head Coach Kenneth Heiner-Moller.
Canada moved into the Semi-Final with goals from Janine Beckie, Nichelle Prince, and Christine Sinclair.  Over the three group stage matches, Canada scored 17 goals while conceding only one with eight different players on the score sheet.
On Beckie’s goal, Ashley Lawrence and Nichelle Prince pressured Costa Rica wide with Prince sliding the ball in to Jessie Fleming, whose feints and flick over the top to Beckie bounced in front of the goalkeeper before Beckie knocked it in in the 26’.
Fifteen minutes later, Janine Beckie’s corner came off a defender wide and Beckie put a bending cross to the back post. The Costa Rican goalkeeper let it bounce and Player of the Match Nichelle Prince buried it off a defender.
“I think we did great throughout the group stage and I think we’re feeling confident,” Prince said. “I feel really good about the team performance right now.”
In the second half, Janine Beckie played a ball wide into space for Nichelle Prince. Allysha Chapman made an overlapping run and received the ball from Prince. Chapman then pulled it back and passed to Christine Sinclair who played it wide and out of reach of the goalkeeper for her 175th international goal bringing her 10 goals away from breaking the all-time FIFA goal record of 184.
Costa Rica’s Gloriana Villalobos scored on the restart after a Canadian sub in the 73’. The goal was the first goal against Canada and goalkeeper Stephanie Labbe in the Group Stage.
“I’m proud of the performance through these group matches, Heiner-Moller said. “Now it’s about preparing for Panama.”
LINEUPS:
Canada’s starting XI featured Stephanie Labbé in goal, Ashley Lawrence at right back, Rebecca Quinn and Shelina Zadorsky at centre back, Allysha Chapman at left back.  Jessie Fleming, Julia Grosso and Diana Matheson anchored the midfield, while Nichelle Prince and Janine Beckie flanked Captain Christine Sinclair up front.
Subs: Sophie Schmidt replaced Julia Grosso at half. Lindsay Agnew came on for Allysha Chapman in the 63’ and Jordyn Huitema came on for Christine Sinclair at the 72’ mark.