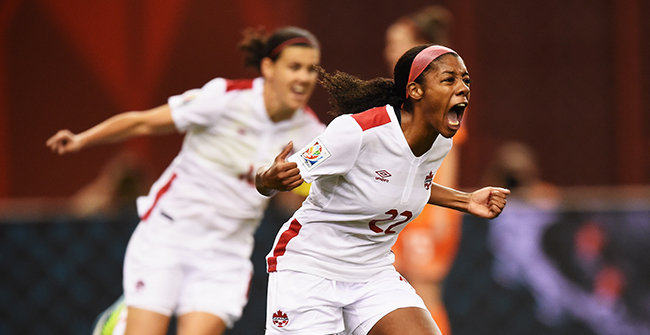 Canada does enough to top Group A, awaits round of 16 opponent

leveling 1:1 with the Netherlands in front of 45,420 cheery spectators at the Olympic Stadium in Montreal, QC

While Canada’s Women’s National Team didn’t quite unleash the scoring prowess fans were waiting for, the squad still did enough to secure the top rank in Group A and move on to the round of 16 at the FIFA Women’s World Cup Canada 2015™, leveling 1:1 with the Netherlands in front of 45,420 cheery spectators at the Olympic Stadium in Montreal, QC.

“That’s the stuff you dream of as a player, to go play in front of that sort of atmosphere,” highlighted Canada’s Head Coach John Herdman to open his post-match press conference. “It certainly fired the girls up to go out there and do what they could. If that is the sort of support we’re going to get in the tournament, this team will just keep fighting.”

Canada looked bright early on and truly lifted the crowd when teenager Ashley Lawrence scored her fist international “A” goal for her country in the 10th minute, calmly directing a deflected shot in the bottom left corner past Geurts’ extended hands.

“I’m really proud of those young players,” said Herdman on the role the youngsters played in the match. “To go out in that sort of atmosphere you either sink or swim, and those girls are swimming. Lawrence has been lighting it up in the midfield, she adds a little bit of pace and just that composure to finish that goal… She had a few chances tonight.”

But the Dutch came out of the halftime break looking for their share of the action. McLeod held on without too much trouble until a charging Van Den Ven broke out to beat the keeper and score the equalizer in the 87th minute of play.

“The Dutch were pretty good tonight, the front four were as good as we expected,” summed up Herdman. “But our back four were pretty resolute at times, and from an attacking perspective, I think Canada, with the young players out there combining with some of the more senior players, put on a good show for the Montreal crowd.”

With this result, Canada finishes Group play with one win and two draws, for a total of five points. It is also enough to sit atop Group A, above China PR and the Netherlands who both finish with four points.

“All in all, top of the group, five points, this was the plan – we’d love to have nine – but job done, we’re happy,” concluded Herdman.

Canada will now head out West to Vancouver, BC where it will await on an opponent that will come out in third position of group C, D or E. The match will take place on Sunday, 21 June at 16.30 local time (19.30 ET) from BC Place. Tickets for Canada’s next match are available on fifa.com/canada2015.

Fans can follow Canada’s Women’s National Team via Twitter @CanadaSoccerEN using #canWNT and share their support by tagging messages and pictures with #CanadaRED. More details of the team’s movement and upcoming opponent will also be shared via Canada Soccer’s social media accounts.