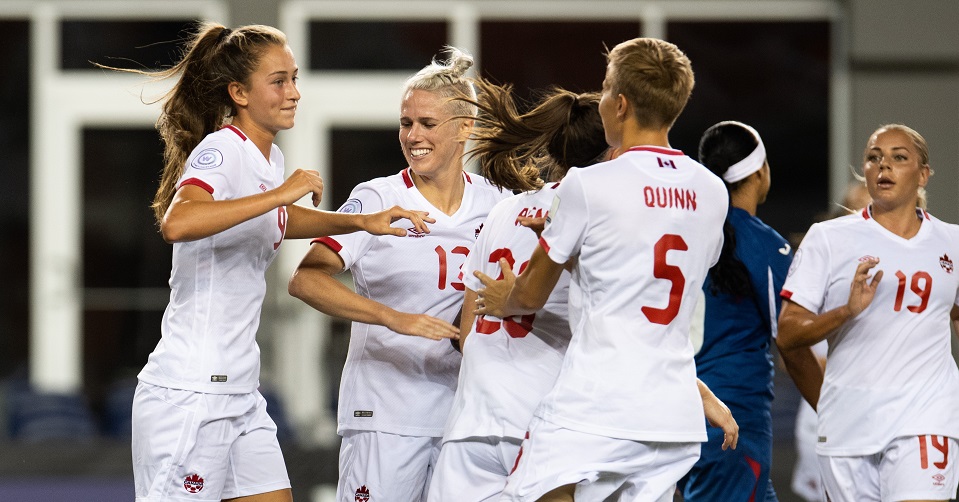 Canada Soccer’s Women’s National Team defeated Cuba 12:0 in the second group stage match of the 2018 Concacaf Women’s Championship at H-E-B Park in Edinburg, Texas. Canada now sits atop Group B with six points, having defeated Jamaica 2:0 on 5 October in their opening match.
“
It was a great win, good performance. What we talked before this match was that no matter what we keep our standards high in respect to our opponents, fans that were watching, and the game, said Kenneth Heiner-Moller. “I’m very pleased.”
Adriana Leon and Jordyn Huitema both scored four goals with Deanne Rose, Rebecca Quinn, Christine Sinclair, and Diana Matheson each scoring for Canada. Diana Matheson’s distribution dictated the play for Canada in the first half creating multiple chances for Leon who was fouled on a glorious chance before the opener.
Leading 5:0 at halftime, Canada made changes and continued pushing forward. Huitema, Leon with two of her four, Rebecca Quinn and second-half substitute Christine Sinclair scored five goals in a fifteen-minute second half span to take the victory.
Canada’s final group stage match against Costa Rica will take place on Thursday, 11 October at 21:00 local (22:00 ET).  A win or draw against Costa Rica on 11 October will see Canada finish first in Group B and through to the Semi-Final Round on 14 October at Toyota Stadium in Frisco, Texas against the second-place finisher in Group A.
Canada and Costa Rica are familiar foes, having played each other in the 2016 Concacaf Olympic Qualification Tournament, and twice in 2017.  While Costa Rica has never beaten Canada, the 33rd  ranked team in FIFA’s Women’s World Rankings, are having a strong year having recorded only three losses in 13 games in 2018.
The winners of the two Semi-Final matches on Sunday, 14 October will automatically qualify for the FIFA Women’s World Cup France 2019™, as well as the winners of the 3rd place match scheduled for Wednesday, 17 October.  The Final, taking place on Wednesday, 17 October, will determine the continental champions.
“We know Costa Rica very well, and we know that they will play differently in a qualification tournament then a friendly, as we saw in Houston in 2016,” said Heiner-Moller.  “We’ve been preparing for three very different opponents in this group stage and we’ve prepared for a challenging match against Costa Rica, but we are really looking forward to it as well.”
LINEUPS:
Canada’s starting XI featured Sheridan in goal, Lawrence at left back, Zadorsky and Quinn at centre back, and Agnew at right back.  Matheson, Schmidt, and Grosso made up the midfield, while Leon, Huitema and Rose started up front.
Canada substituted Christine Sinclair, and Emma Regan on for Deanne Rose and Ashley Lawrence to start the second Half. Gabrielle Carle came on for Julia Grosso in the 67’.