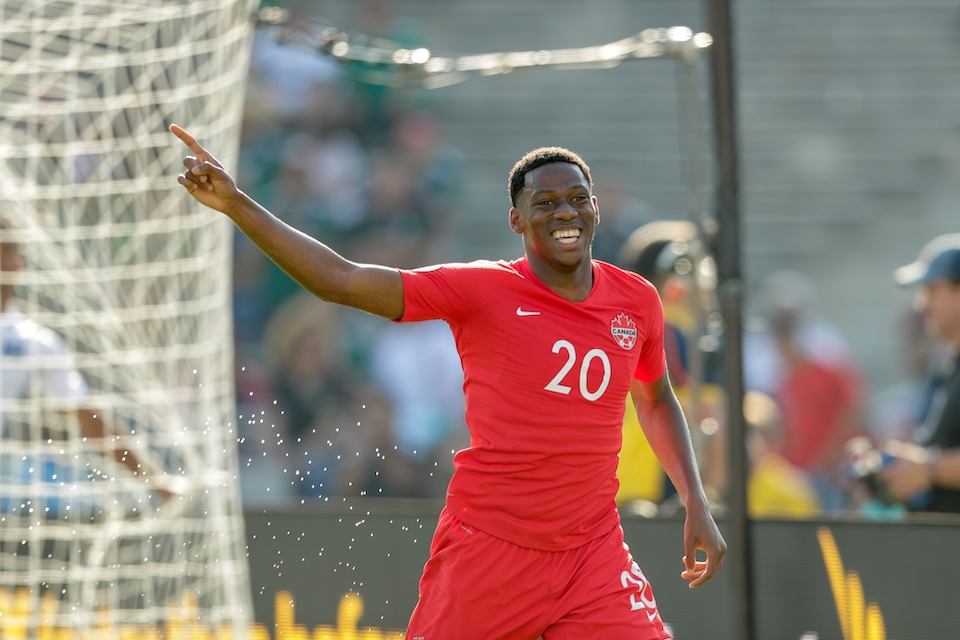 Canada opened the 2019 Concacaf Gold Cup with their largest-ever margin of victory in the confederation championship: a 4:0 victory over Martinique at the Rose Bowl […]

Canada opened the 2019 Concacaf Gold Cup with their largest-ever margin of victory in the confederation championship: a 4:0 victory over Martinique at the Rose Bowl in Pasadena. The victory gave Canada three points to take an early lead in Group A standings with goals scored by Jonathan David, Junior Hoilett and captain Scott Arfield.

“We knew Martinique were going to be a challenge, particularly in transition, but I think the players stuck to the plan and were able to enjoy the moment,” Head Coach John Herdman said.

The victory was the second of the day as part of Canada Soccer’s Super Saturday. Earlier in the day, Canada won 2:0 at the FIFA Women’s World Cup France 2019 over New Zealand to clinch a spot in the Round of 16. At the 2019 Concacaf Gold Cup, Canada will follow up with their second group match on Wednesday 19 June against Mexico before closing out the group on 23 June against Cuba. At France 2019, Canada will close out their group phase on 20 June against Netherlands.

Jonathan David capitalized on a Martinique turnover in the 33’ picking up the errant pass and taking a touch to send Martinique GK Loic Ludovic Chauvet to the ground before finishing for the 1:0 lead that Canada took into halftime.

Early in the second half, David got a second goal on a ball over the top from Samuel Piette in the 53’ by avoiding the offside trap and bringing down the pass before taking a few touches and finishing off the post into the right side of the net. The goals by David mark only the second time a Canadian teenager has scored in the Concacaf Gold Cup following Alphonso Davies’s Golden Boot performance in 2017.

“It feels good, it’s an amazing feeling because I’m representing my country, if I score or assist, I just want to help my team,” said Jonathan David. “We knew this was the first game and everyone is watching so we knew we had to make a statement today and win, and that’s what we did.”

On the third goal, after fighting to win the ball Davies played a beautiful through ball into the box for Junior Hoilett who hit a right footed strike into the back of the net in the 63’.

Canada scored its fourth in the 67’ when Lucas Cavallini picked up the ball in midfield to play Davies wide in space. Davies played a through ball to an advanced Kaye who found Arfield wide open at the top of the Martinique 18 and Arfield took a quick touch and drove it into the net

Canada spent much of the first half using their pace on the wing with Davies and David finding space on and off the ball. Mark-Anthony Kaye had Canada’s first chance in the second minute but put his shot over the bar. Martinique pushed Canada’s backline for the closing minutes of the first half forcing a few big saves from GK Milan Borjan who held the lead heading into halftime.

Canada’s starting XI featured Milan Borjan in goal, Marcus Godinho at right back, Atiba Hutchinson and Derek Cornelius at centre back, Mark-Anthony Kaye at left back, and Jonathan Osorio, Scott Arfield, Samuel Piette, Alphonso Davies, Jonathan David and Junior Hoilett from the midfield up through to the attack. In the second half, coach John Herdman replaced Osorio with Lucas Cavallini (63’), Davies with Liam Millar (69’), and Kaye with Russell Teibert (75’).

Individual match tickets are available starting at just $20 and fans will have the opportunity to save 20% by purchasing a two-match package for both games. The launch of public ticket sales will be preceded by a 24-hour presale offer for Canada Soccer Insiders. Groups of 10+ are eligible for discounts of up to 30% and dedicated sections will be allocated for Canadian supporters as well as those from both Cuba and the United States. For complete ticket information and to submit a group ticket order visit canadasoccer.com/tickets.