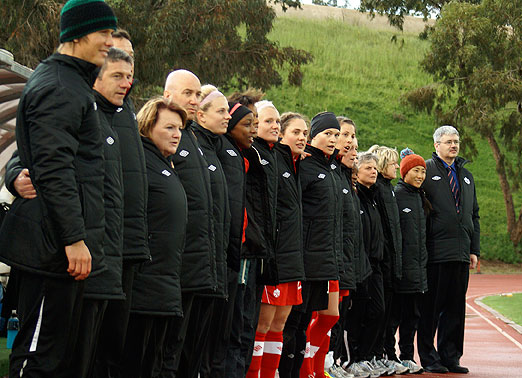 Canada has finished second at the annual Cyprus Women’s Cup in Cyprus. The Canadians reached the final for the fifth consecutive time, but lost 0:2 to France in the 6 March 2012 championship final. In all, Canada posted three wins and one loss in four matches played in Larnaka and Nicosia.

The loss to France also ended an 11-game win streak at the Cyprus Women’s Cup. In the five years since the tournament’s inception, Canada has won it three times and finished runner up twice.

Canada posted wins against Scotland (5:1 on 28 February), Italy (2:1 on 1 March) and Netherlands (1:0 on 4 March) in the lead up to the final. France had also won its three matches in group play to reach the final.

Canada was one of five Olympic teams that participated in the fifth edition of the Cyprus Women’s Cup from 28 February to 6 March. Throughout Canada’s build up towards the London 2012 Olympics, fans are able to track the progress of Canada’s via CanadaSoccer.com, as well as social media platforms on Twitter @CanadaSoccerEN, Facebook, Flickr and CanadaSoccerTV.