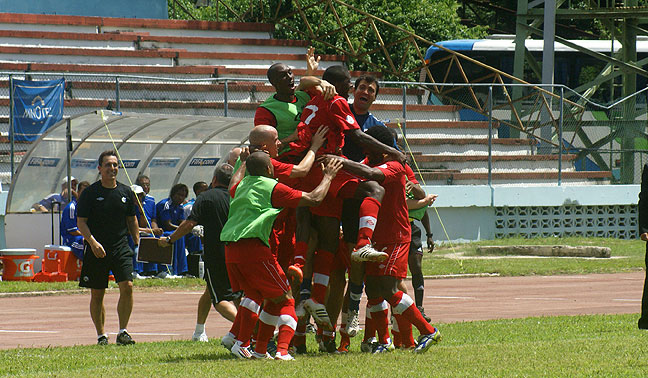 Canada gets three on the road in Cuba

Canada won 1:0 away over Cuba

Canada collected three points on the opening day of the CONCACAF 3rd Round of the 2014 FIFA World Cup Brazil Qualifiers. Canada won 1:0 away over Cuba at the Estadio Pedro Marrero in La Habana, Cuba, holding on for the win despite being reduced to 10 men midway through the second half.

“People have to appreciate how very difficult it was in these conditions,” said Canadian head coach Stephen Hart. “The players endured and overcame the incredible heat and pitch conditions on which we struggled to adapt.”

Kick off for the 8 June 2012 match was 14.00 local, with the sun out in full force for nearly the entire match. For the big win on the road, Canada had the support of a large traveling contingent that filled the stands and rooted for Canada at every touch.

Olivier Occean scored the lone goal with an assist from David Edgar. Will Johnson was selected Canada’s player of the match.

Next up for Canada is a match agaisnt Honduras at home on 12 June in Toronto (19.30 local). Future matches will be played in September and October. Tickets to Canada’s 2012 home matches are available via ticketmaster.ca or by phone at 1.855.570.7500, with full information available on CanadaSoccer.com. Group discounts are available via [email protected] or 613.237.7678.

For full coverage of Canada’s road to the 2014 FIFA World Cup Brazil™, fans can follow all the news at CanadaSoccer.com. Fans are also encouraged to connect with Canada’s national teams via twitter.com/CanadaSoccerEN, facebook.com/CanadaSoccer, flickr.com/canadasoccer, and youtube.com/CanadaSoccerTV. The Tuesday 12 June match will be broadcast live on Sportsnet One.