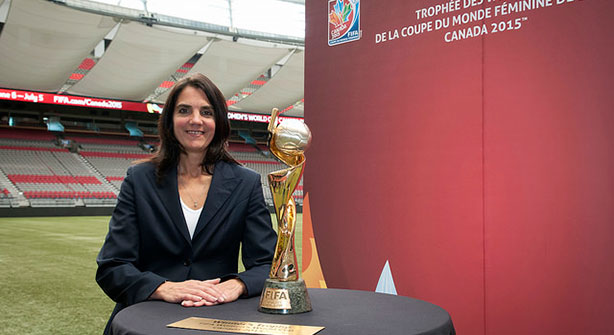 Sandra Gage spoke at the House of FIFA on Friday 6 March in Zurich while Sylvie Béliveau spoke at the Canadian Museum for Human Rights on Sunday 8 March in Winnipeg.

As part of its annual celebrations around International Women’s Day, FIFA hosted a one-day conference on Friday 6 March covering key topics related to women’s football and women in sport governance. The event featured experts and leaders from football, business and wider society, including Canada’s Sandra Gage, Chief Marketing and Communications Officer of the National Organising Committee for the FIFA Women’s World Cup Canada 2015™.

To mark International Women’s Day (Sunday 8 March), FIFA President Joseph S. Blatter signed the Brighton Plus Helsinki Declaration with the International Working Group on Women andSport at the FIFA conference – a declaration which sets out principles to support the empowerment of women in society and to promote gender equality.

Jacqui Oatley, one of Britain’s best-known sports broadcasters who became the first female commentator to feature on BBC’s Match of the Day, moderated the two panels – one focusing on best practices in women’s football and the other looking at the challenges and opportunities when it comes to women in leadership.

Said Lydia Nsekera, the first woman to become a full member of the FIFA Executive Committee, “equality among men and women is far from being achieved. We must have more women in the congresses of the associations and in the congress of FIFA. I would like to call on all women to work hard, with men, to overcome the existing obstacles.”

Sylvie Béliveau, Canada Soccer’s Manager of Long-Term Player Development, spoke on International Women’s Day to highlight women’s rights, sports and the power of soccer to break down cultural barriers to unite everyone.