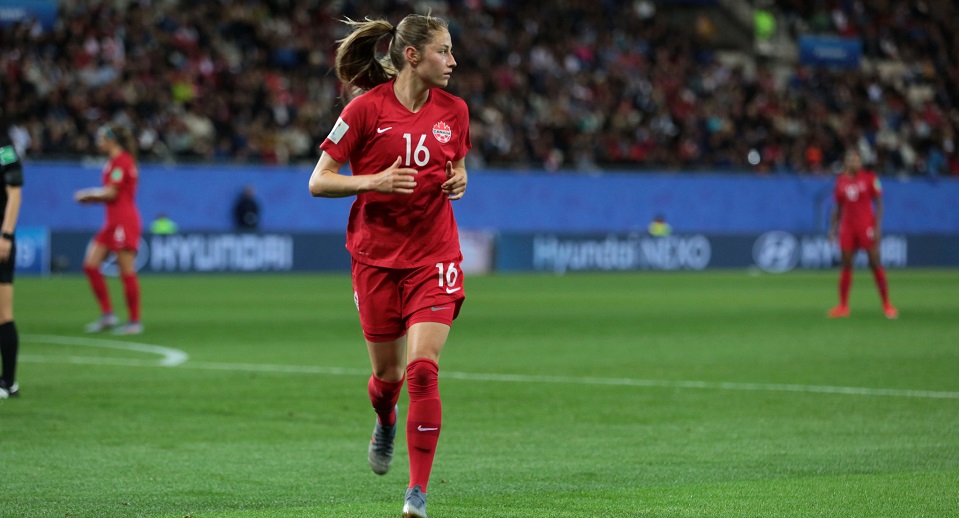 Canada will look build on the foundation of an excellent season in order to advance past their first opponent in the knockout phase: a win-or-go home […]

Canada will look build on the foundation of an excellent season in order to advance past their first opponent in the knockout phase: a win-or-go home Round of 16 match against Sweden at the FIFA Women’s World Cup France 2019™. Canada have both the experience and quality to advance to the Quarterfinals, but they face an equally tough opponent in Sweden who like Canada posted two wins and one loss in the group phase.
The Canada-Sweden match kicks off at 21.00 local and will be broadcast live across Canada on TSN, CTV and RDS at 15.00 ET / 12.00 PT. Extended match day coverage is featured across Canada Soccer’s digital channels including Facebook, Instagram and Twitter. Fans are encouraged to follow Canada Soccer’s Women’s National Team every step of the way by using their social media handle, #CANWNT.
Canada won group matches against Cameroon and New Zealand before falling to European champions Netherlands in the group finale. Opening with back to back wins for the first time ever, Canada equaled their best record with six points in the FIFA Women’s World Cup™ group stage. This marks the third time that Canada have reached the knockout phase of the FIFA Women’s World Cup™ (2003, 2015, 2019).
“We had some great quality games in the group stage and I think that now, coming out of this loss against Netherlands, we’ve got a bit of that fire,” said Canada Soccer midfielder Desiree Scott. “It’s not that the tournament hadn’t started, but it’s real now. It’s do or die. We want to go out there and reckon that performance we gave and give it our all for this Round of 16.”
Over the past ten years, Canada have faced Sweden 10 times, posting four wins, three draws and three losses in those matches. Canada most recently faced the 2016 Olympic silver medallists in the Bronze Medal match of the 2019 Algarve Cup, winning on kicks from the penalty mark after an 0:0 draw.
“Sweden is a hard-working, solid, defensive team,” said Kenneth Heiner-Møller, Canada Soccer’s Women’s National Team Head Coach. “They have good pace wide and up front and very skillful players. It is definitely a tier one opposition. They had good results lately, not just here, but also at the last Olympics, so it will be a tough match, but I think we will be primed for it.”
At the group stage of France 2019, Kadeisha Buchanan was the player of the match and goalscorer in the 10 June victory at Montpellier while Jessie Fleming was the player of the match and opening goalscorer in the 15 June victory at Grenoble. Nichelle Prince was Canada’s other goalscorer in the second match while Christine Sinclair was the player of the match and Canada’s goalscorer in the third match against Netherlands.
“When you look at the players we have, there are different players scoring goals for us,” said Canada’s captain Christine Sinclair. “Nichelle (Prince) has been incredible in this tournament and Jessie (Fleming) got onto the scoreboard, so it shows we’ve got a lot of weapons going forward. For me, that’s exciting.”
The winner of the match will head to Rennes to face Germany in the Quarter-finals on 29 June at Roazhon Park.
Four years ago, Canada won 1:0 over Switzerland in the Round of 16 in front of 53,855 fans at BC Place, at the time a new record for the largest in-stadia crowd for a Canadian national team match of any sport played in Canada.

CANADA AT THE FIFA WOMEN’S WORLD CUP FRANCE 2019™
At France 2019, Canada have the third-youngest side at average 25.33 years (nearly 25 years, 4 months) across 23 players. Within the group, 22 of 23 players have featured in a previous FIFA youth World Cups before France 2019, including three teenagers who helped Canada finish fourth at the FIFA U-17 Women’s World Cup Uruguay 2018.
CANADA AT THE FIFA WOMEN’S WORLD CUP : http://canadasoccer.com/?t=project&sid=1272
Fans are encouraged to be part of Canada’s journey at the FIFA Women’s World Cup™ from 10 June to 7 July by watching all the action live on TSN and RDS. Fans can also follow the Women’s National Team both on and off the pitch across Canada Soccer’s digital channels including CanadaSoccer.com, Facebook, Twitter, and Instagram.
Beyond the Round of 16, the FIFA Women’s World Cup France 2019™ Quarter-finals are 27-29 June, the Semi-finals are 2-3 July, and the Final is 7 July.
OLYMPIC MEDAL WINNERS & CONCACAF CHAMPIONS
Canada are two-time Olympic bronze medal winners (2012 and 2016) and two-time Concacaf champions (1998 and 2010). In all, Canada have participated in seven consecutive editions of the FIFA Women’s World Cup™ (1995 to 2019) and three consecutive editions of the Women’s Olympic Football Tournament (2008 to 2016). At Rio 2016, Canada Soccer’s Women’s National Team were the first Canadian Olympic team to win back-to-back medals at a summer Olympic Games in more than a century.
WOMEN’S NATIONAL TEAM: https://www.canadasoccer.com/women-s-national-team-p144312
Canada Soccer’s Women’s National Youth Teams, meanwhile, have won four Concacaf youth titles: the 2004 and 2008 Concacaf Women’s Under-20 Championship, the 2010 Concacaf Women’s Under-17 Championship, and the 2014 Concacaf Girls’ Under-15 Championship. Canada have qualified for seven editions of the FIFA U-20 Women’s World Cup (including a silver medal at Canada 2002) and all six editions of the FIFA U-17 Women’s World Cup (including a fourth-place finish at Uruguay 2018).
SUMMER OF SOCCER: TOGETHER WE RISE
Canada’s National Teams have embarked on an incredible month of competition during the FIFA Women’s World Cup France 2019™ and the 2019 Concacaf Gold Cup. The National Teams are united as “Together We Rise” with the momentum for our game stronger than ever. We urge Canadians to rally behind the National Teams as our Canada Soccer Nation strives for best-ever performances.
TOGETHER WE RISE: https://www.canadasoccer.com/together-we-rise-p162202