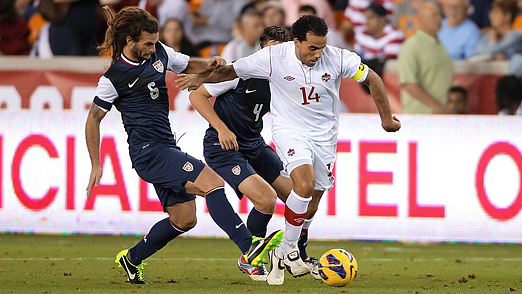 Canada drawn into Group A with Martinique, Mexico and Panama.

The schedule for the 2013 CONCACAF Gold Cup was unveiled at a press conference in Chicago, IL on Wednesday 13 March.

Canada’s Men’s National Team have been drawn into Group A at the tournament where they will take on Martinique, Mexico and Panama.

The Canadians will feature in the opening-day action at the tournament with a fixture against Martinique at the Rose Bowl in Los Angeles, CA on Sunday 7 July (17.30 ET / 14.30 PT).

The team will then travel north to Seattle for a match against defending champions Mexico at CenturyLink Field on Thursay 11 July (23.00 ET / 20.00 PT).

Canada will then close out the group stage with a match against recent FIFA World Cup™ Qualifiers rivals Panama at Sports Authority Field at Mile High in Denver, Co on Sunday 14 July (18.30 ET / 15.30 PT).

The top two teams from each group will advance to the quarter-finals.

Canada are one of only three nations ever to have won the CONCACAF Gold Cup, having claimed the confederation title in 2000.

A complete schedule for the 2013 CONCACAF Gold Cup can be found at CONCACAF.com.