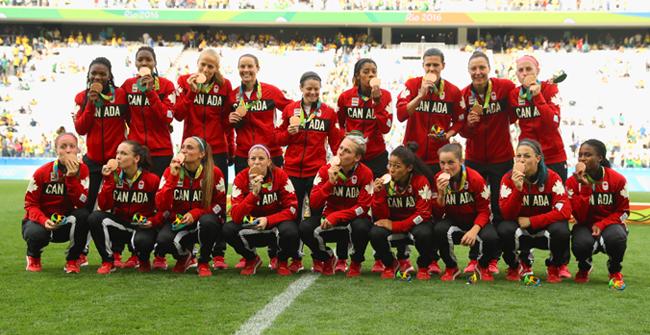 Canada are back on the podium after a historic run at the Rio 2016 Women’s Olympic Football Tournament. Canada won five of six matches to claim their second consecutive bronze medal, culminating their run with a 2:1 victory over host Brazil.

On the final day, it was again Canada’s blend of youth and experience that made the difference. Seventeen-year old Deanne Rose opened the scoring and captain Christine Sinclair scored the eventual winner, with one goal on either side of the break. Incidentally, both Sinclair and Rose also hit the woodwork in the victory.

“This is such a true testament to the leadership and dedication from everyone involved in our Women’s National Team Program,” said Peter Montopoli, Canada Soccer’s General Secretary. “We have a world-class program, from our heroes on our back-to-back Olympic bronze medal team to our youth players in the EXCEL Program to the next generation growing up across the nation. It was wonderful to see an entire nation come together to support Canada’s team from coast to coast to coast.”

With 39,718 fans in attendance at the Arena Corinthians in São Paulo, Deanne Rose opened the scoring in the 25th minute after a brilliant run down the left wing by Ashley Lawrence. Rose made her equal run to the back post and knocked it in for the 1-0 lead.

In the second half, it was Rose’s turn to be provider when she centered a pass into the box to Sinclair. Canada’s captain made no mistake in doubling the lead with the 52nd minute strike – a goal that turned out to be the winner after Beatriz scored for Brazil in the 79th minute.

“It was pretty surreal the whole experience,” said Head Coach John Herdman, Canada Soccer’s Women’s National Team Head Coach. “The crowd was fantastic. There was just an inner belief that it was going to happen today. These girls were very clear in what they wanted to do. It has just been a great experience, this whole tournament has been fantastic.”

#CanWNT Deanne Rose opens the scoring. 1-0 #CAN over #BRA in the #Bronze-medal game. https://t.co/xzNAhUlqZn https://t.co/Iz0IWqQYHO

#CanWNT Christine Sinclair gives #CAN a 2-0 lead over #BRA in the #Bronze-medal game. https://t.co/xzNAhUlqZn https://t.co/bY4hbYgqj8

This marks Canada’s third consecutive participation at the Women’s Olympic Football Tournament. Four years ago at London 2012, Canada won a historic bronze medal, the nation’s first in a summer team sport since 1936. Through Rio 2016, the Women’s National Team’s impact across back-to-back Olympic Games has been unifying the country while serving as strong role models for the next generation of Canadian footballers.

The Rio 2016 Women’s Olympic Football Tournament runs 3-19 August in six venues (seven stadiums) across Brazil. Across three venues, Canada have traveled 3,182 kilometres from São Paulo to Brasilia to São Paulo to Belo Horizonte and back to São Paulo. Support for #CanadaRED has been tremendous both before and during the Olympic Games, with complete coverage at CanadaSoccer.com. Since the opening match on 3 August, fans have watched every game live on Canadian television and followed #CANWNT across multiple digital and social networks including Facebook, Instagram, Snapchat, and Twitter.