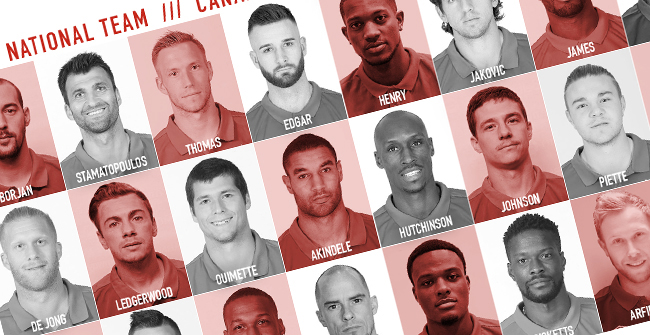 Canada Canada Soccer has announced a 23-player Men’s National Team squad for the upcoming 2018 FIFA World Cup Russia™ Qualifiers in Vancouver and Mexico. Head coach Benito Floro will have this group of players for both the official matches on Friday 25 March at BC Place at Tuesday 29 March at Estadio Azteca.

The Canadian team will be in camp starting 21 March in Vancouver, British Columbia. The Friday night home match has already surpassed 46,000 tickets sold, with #CanadaRED support continuing to swell in the week before the home match. This will mark the largest attendance for a FIFA World Cup™ Qualifiers match ever hosted in Canada.

As part of the lead up to the match, there will be a fan rally with the Voyageurs supporters group on Thursday 24 March, the eve of the match. On Friday starting two hours before kick off (17.00 local), there will be a Canada Soccer Fan Fest outside BC Place at the Terry Fox Plaza.

“Such a big crowd is very important for Canadian soccer,” said Floro. “We had great support for our last match (in November) and it was a very nice experience for everyone, so we must continue that with the upcoming match against Mexico. Everyone wants Canada to play well and hopefully we can get a result for our supporters.”

CANADA SQUAD
Head coach Benito Floro has called an experience squad, with recent Canadian Players of the Year Atiba Hutchinson, Will Johnson, and Julian de Guzman all included in the squad. The 23 players were called from professional clubs on three continents.

Julian de Guzman has the most experience, with a Canadian record 85 international appearances to his credit. Before the home match on Friday, Canada Soccer will honour their star through a special pre-match presentation in recognition of his record number of appearances set last November.

Among the younger players on the squad are 22-year old Doneil Henry, 21-year old Samuel Piette, and 20-year old Cyle Larin. Henry (15 appearances) is one of just four players yet to make his official debut in FIFA World Cup Qualifiers, with the others Simon Thomas (two appearances), Steven Vitória (one appearance), and debutant Scott Arfield.

From the list of attackers, Larin has recently scored in back-to-back weeks with Orlando City SC, while Junior Hoilett has scored a pair of goals for Queens Park Rangers in recent weeks. As for title races, Hutchinson currently has Beşiktaş JK at the top of the Turkish Süper Lig standings with just over two months to go.

SUPPORT #CANADARED, BE CANADA’S 12th MAN
The Canada-Mexico match promises an unforgettable atmosphere. With the lower bowl already full, upper bowl seating is available to fans starting as low as $15 in the recently opened end zone seats (plus applicable fees). The popular ‘Me+3’ offer will remain available in select sections, available directly via Tickmaster.ca by selecting the ‘Me+3’ offer.

Group discounts will continue to be offered, with groups of 10 or more eligible to receive discounts of up to 30% off regularly priced sections. Group tickets will be processed on a first come, first served basis, for complete information and to submit a request for tickets visit the group ticket section on CanadaSoccer.com/tickets.