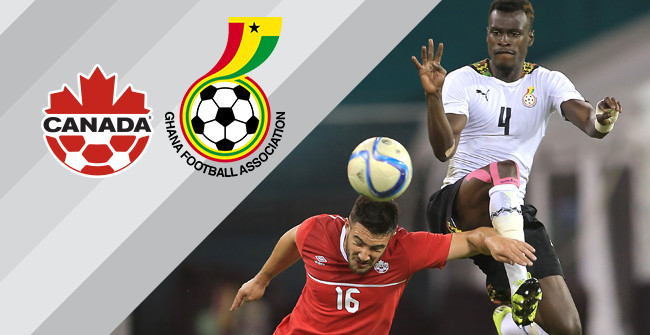 A young Canadian Men’s National Team put in a confident performance to draw 1-1 with African giants Ghana in an International Friendly played Tuesday night at RFK Stadium in Washington, DC. The cohesive and dangerous Canadian attack was highlighted by an exceptional long-range strike from full back Marcel De Jong in the first half and an impressive all-action performance by debutant Junior Hoilett.

“We’re pleased that each and every one of the players that appeared tonight played with not just honour for the country but they played with a sense of pride and positive play,” said assistant coach Michael Findlay. “In terms of performance we’re very happy but we can’t be satisfied as we didn’t win the game.”

Impressively, six different players made their Canadian debut on Tuesday as Junior Hoilett, Wandrille Lefevre, Kianz Froese, and Charlie Trafford, were included in Canada’s starting XI; Fraser Aird entered the match at halftime and Macros Bustos was a second half substitute. All six acquitted themselves well as a relatively unfamiliar Canadian squad gelled quickly during a six day camp in Orlando and subsequent training sessions in Washington, DC.

“We had some players who were inserted into key areas of the park, central defence, attack and central midfield and in terms of how they applied themselves and how they played we’re very proud,” said Findlay. “Benito (Floro) will review and look at the players who came in. We were missing some of regular players, but there are some players here who will make our decisions very difficult moving forward.”

Canada will now look ahead to a pair of massive 2018 FIFA World Cup Russia™ Qualifiers next month. The Canadian squad opens with a crucial match v Honduras on 13 November at BC Place in Vancouver, BC. Canada’s players on calling on local soccer fans to create a sea of red in the stadium – tickets are available now via Ticketmaster.ca.