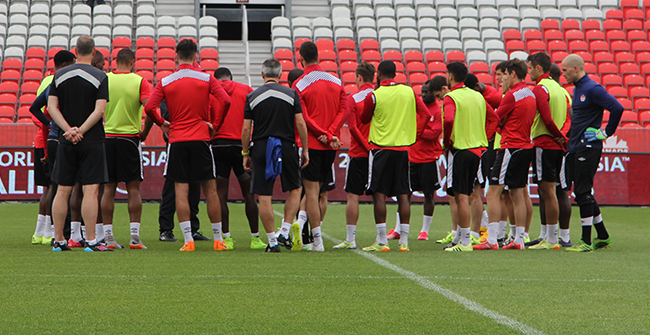 Canada MNT looking to finish off Dominica at home

As two-goal wins go, Canada’s 2:0 win over Dominica on Thursday in Roseau was a bit more lopsided than the score would indicate.

Now back at home and set to tackle the return leg of the two-game series, Canada is looking to finish off the scrappy team from the small Caribbean island on Tuesday night at BMO Field in Toronto.

“We treat these games no differently than the games against big teams like USA and Mexico so it’s the same approach,” said team captain Julian de Guzman after Canada trained at BMO Field on Monday.

“You can tell by the seriousness of the guys in practice leading into the game that nothing is guarantee in these knockout games. It’s 180 minutes of football and we’ve taken care of 90 minutes so far.”

Canada will have one enforced change, as Milan Borjan will be unable to start in goal after picking up a red card in Thursday night’s game. Both Kenny Stamatopoulos and Lars Hirschfeld will be eligible to step in.

The team will be in familiar surroundings at BMO Field as Canada has a nine-game unbeaten streak at the stadium. The field in Roseau was quite a bit wider than where they’ll play in Toronto and Canada’s looking forward to getting the home portion of this qualifying campaign underway.

“Here, it’s more compact than how it was in Dominica. This will definitely allow us to play more football and do what we do best,” said de Guzman. “From what I remember playing at home, the results we’ve produced have been really good. We want to keep that up and have a lot more goals on our side.”

Should Canada get through Tuesday night, they’ll be into the draw for the third round, which would be another home-and-away series taking place in September.

The draw for the third and fourth rounds takes place in Russia on 25 July.