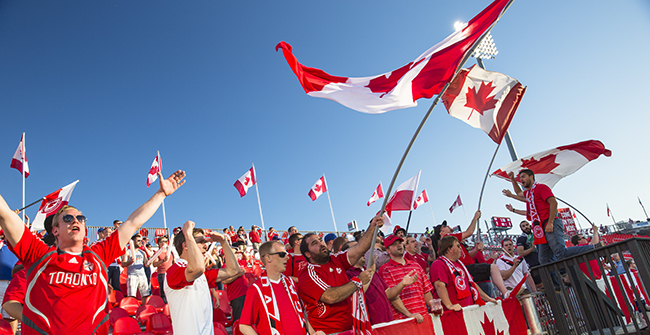 Canada’s Men’s National Team will be looking to draw upon strong home support when it faces Costa Rica in its final 2015 CONCACAF Gold Cup group stage match on Tuesday evening at Toronto’s BMO Field. Canada is nearly facing a ‘must-win’ scenario to advance from its group to the knock-out stages of the competition following a 0:0 draw against El Salvador and a heartbreaking 1:0 loss to Jamaica in its opening two matches of the confederation championship.

BMO Field has been a veritable fortress for the Canadian Men’s National Team having gone undefeated in ten straight matches dating back to June of 2011. In addition, Canada has recorded four straight wins at the national soccer stadium highlighted by its recent 4:0 win over Dominica in the early rounds of 2018 FIFA World Cup Qualifiers this past June.

“To win the game, we must play well in attack, make a good pressing and to have luck” said Benito Floro at Monday’s press conference. “We have set-up our structure based on the quality of the players. We plan to play well, and to make necessary changes to react to how Costa Rica plays. We lost the last match but for the first 92 minutes our team was in good positioning.”

The Canadian team arrived in Toronto late on Sunday evening and trained at Downsview Park on Monday morning. Despite losing its last match to Jamaica on an injury time goal in the searing heat of Houston, the squad remains confident heading into the crucial clash with a strong Costa Rican side which reached the quarterfinals of the 2014 FIFA World Cup Brazil last summer.

“There is a sense of urgency amongst the squad,” said Captain Julian de Guzman. “We realize the situation we’re in at this point, tomorrow’s game is like a final. The special thing about it is that we’re at home and we’ll have the support of our fans and that’s one of the motivational factors going into this game. From the last game, we’ve bounced back and are coming into this game with a positive vibe. The most important thing at this point is self-belief. We haven’t lost a game at BMO Field in over four years so that’s a special thing that we have on our side.”

The experienced De Guzman is quickly approaching a notable personal milestone as he sits on 81 career international appearances for Canada, tied with Dwayne De Rosario for third most all-time amongst Canadians and only three back from record holder Paul Stalteri on 84. De Guzman is representing Canada in a record sixth CONCACAF Gold Cup.

Coming into Tuesday’s final Group B matches, Jamaica leads the group having earned four points (+1 goal differential) from its opening two matches. Costa Rica two points (+0) and El Salvador two points (+0) sit tied in second, with Costa Rica taking the tie-breaker having scored more goals. Canada currently sit is last place with a single point (-1). While there are several different permutations available for Canada to advance beyond group stage, the focus is on winning Tuesday’s match to all but ensure advancement.