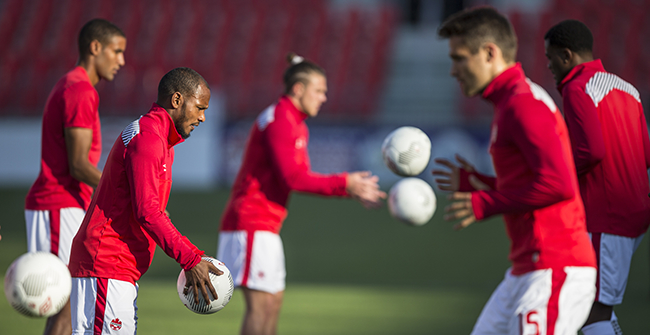 The 2015 CONCACAF Gold Cup comes at an important time for the program as it takes measure of the progress and development made under Head Coach Benito Floro in advance of an important series of FIFA World Cup qualifying matches this September.

Canada is coming off a string of positive results culminating in a comprehensive two-leg victory over Dominica in the early stages of 2018 FIFA World Cup Qualifiers and Floro has stressed the importance of maximizing the team’s matches at the Gold Cup.

“The Gold Cup for us is an excellent preparation for September qualifiers,” said Floro during a national media call on Monday. “We need to play games, we believe in our players and the progress we have made but it’s time to test. Our success depends on our mentality.”

After Wednesday’s opening match against El Salvador, Canada will travel to Houston’s BBVA Compass stadium to face rivals Jamaica on Saturday, 11 July (18.30 ET / 15.30 PT) before returning to Canada to play Group B favourites Costa Rica on home soil at Toronto’s BMO Field on Tuesday, 14 July (20.30 ET / 17.30 PT). The Toronto match will mark the first time the CONCACAF Gold Cup has been hosted in Canada.

Floro took a moment to encourage Canadian supporters to get behind the team and attend the 14 July match.

“If we have a good result in the first matches, it will be a very good game for fans. Costa Rica is one of the best now. We want to be in a position to fight for top of the group,” said Floro.

The Canadian squad arrived at its base in Torrence, California on Monday evening following an intensive week long preparation camp in Santa Barbara. Several members of the 23-player squad come into the tournament in good form and many Canadian fans will be hoping to see the continued development of the striking partnership of Tesho Akindele and Cyle Lairn who both notched their first international goals for Canada in the wins over Dominica in June.

As has often been the case under Floro, there are a mix of young and veteran players in the team while the experienced Julian de Guzman, who will wear the captain’s armband, prepares to make his sixth Gold Cup appearance.