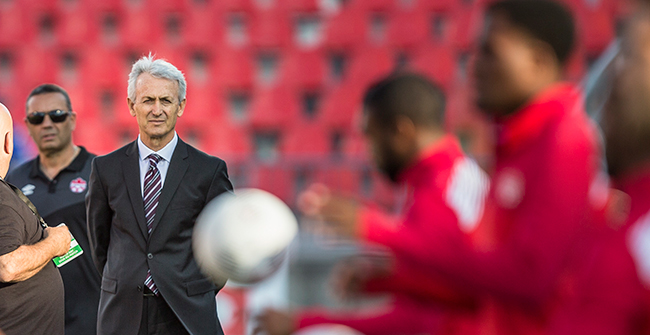 15 years after Canada’s only victory in the tournament, Canadian Head Coach Benito Floro has named the 23 players that will assemble in California to prepare for their first game of the tournament against El Salvador on 8 July at StubHub Center in Carson, California.

“The main aim in this Gold Cup for us is to get as far as possible. We want to get to the final and every game that we get in the tournament will increase our level of play,” said Floro.

The team assembles in California on 28 June and will get just over a week to prepare for their tournament opener. After the El Salvador game, Canada heads to Houston to take on Jamaica on Saturday 11 July before heading up to Toronto to take on Costa Rica in the first ever Gold Cup game in Canada on 14 July.

Canada enters the competition riding a four-game winning streak and a five-game unbeaten run. But friendlies and early round of FIFA World Cup Qualifiers are one thing; this challenge will be a big test for the Canadian progress under Floro.

“It is true that good results always help,” said Floro. “But now we are going to play against three teams that are higher ranked than us so we need to show that we are growing and developing against those teams and show that we are doing things in the right way.”

Canada just wrapped up camp a few days ago after a pair of victories over Dominica in a home-and-away series. It’s a busy time for the program as the team will find out their prospective qualifying path towards the 2018 FIFA World Cup Russia™ later in July.

All of 2015 CONCACAF Gold Cup matches will be broadcast live in Canada on Sportsnet World. Consult local listings for additional details.