Canada Soccer has added a Men’s International Friendly match to the 2016 calendar for this coming June. As part of an upcoming Austrian camp during the FIFA international window, Canada will face Azerbaijan on Friday 3 June.

Canada are currently preparing for a pair of 2018 FIFA World Cup Russia™ Qualifiers at the end of March against Mexico, with the 25 March home match already sold to more than 40,000 spectators at BC Place in Vancouver. Canada’s June match will help them prepare for the next two Qualifiers in September 2016 against Honduras away and El Salvador at home.

This will be Canada’s first encounter with Azerbaijan at the international “A” level. Azerbaijan ranks in the middle of UEFA’s 54 nations, with their 2018 FIFA World Cup Russia™ Qualifiers to commence in September.

“We consider this match during the June window a very good test for our players,” said Benito Floro, Canada Soccer’s Men’s National Team Head Coach. “This camp in Europe will be important because it will give us the opportunity to practice and create positive methods within our team.”

Azerbaijan recently went through a difficult qualifying campaign for the UEFA EURO 2016, gaining just six points through 10 matches with a win, three draws, and six losses. Azerbaijan’s next Men’s International Friendly match is 26 March 2016 against Kazakhstan.

CANADA PREPARES FOR MEXICO
Canadian support continues to swell ahead of Canada’s home match on 25 March at BC Place in Vancouver, with already a record-setting 40,000 tickets sold for the FIFA World Cup™ Qualifiers match on home soil. The full stadium is now on sale, with seats in the upper bowl end zones available for as little as $15 each.

“Such a big crowd is very important for Canadian soccer,” said Floro. “We had great support for our last match (in November) and it was a very nice experience for everyone, so we must continue that with the upcoming match against Mexico. Everyone wants Canada to play well and hopefully we can get a result for our supporters.”

SUPPORT #CANADARED, BE CANADA’S 12th MAN
The Canada-Mexico match promises an unforgettable atmosphere. With the lower bowl already full, upper bowl seating is available to fans starting as low as $15 in the recently opened end zone seats (plus applicable fees). The popular ‘Me+3’ offer will remain available in select sections, available directly via Tickmaster.ca by selecting the ‘Me+3’ offer. 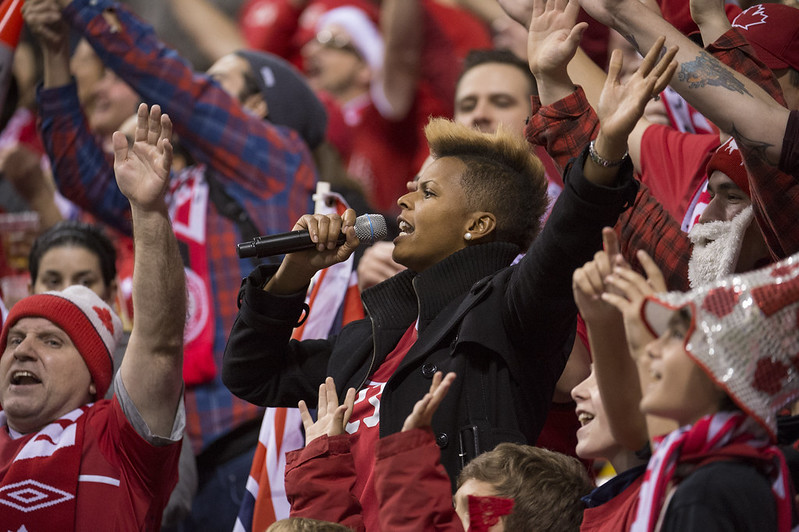 ROAD TO THE 2018 FIFA WORLD CUP RUSSIAThe 2018 FIFA World Cup Russia™ is the biggest single-sport event in the world. From 209 member associations from around the world, 32 finalists will qualify for the 32-day event that is played in 11 cities from 14 June to 15 July 2018.Canada are amongst the 12 CONCACAF nations in the hunt for a spot at the 2018 FIFA World Cup Russia. The remaining nations have been split into three groups for the continent’s 2015-2016 semi-final stage. The top-two nations in each group will advance to the final round in 2017, from which three nations qualify for Russia 2018 and the fourth team advances to an intercontinental playoff.In CONCACAF Round 4, Canada will play six matches, with both a home and away encounter against Honduras, El Salvador and Mexico. Matches will be played over three international windows, with Canada gaining a valuable four points after the first two matches with a victory over Honduras (1:0) at home on 15 November 2015 and a draw in El Salvador (0:0) on 17 November 2015.Following the home and away matches with Mexico on 25 and 29 March, 2016, Canada then faces Honduras away and El Salvador at home again in September 2016.