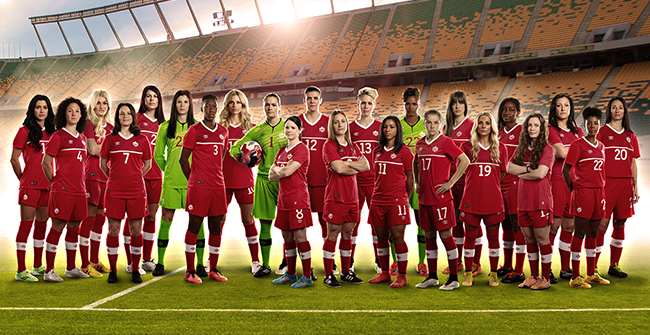 With 40 days to go until the start of the FIFA Women’s World Cup Canada 2015™, Canada Soccer is thrilled to announce the 23 players that will don the Maple Leaf this summer and represent Canada on the world stage.

After years of preparations and planning, Head Coach John Herdman has the start line in sight – the opening game against China PR on Saturday 6 June at Commonwealth Stadium in Edmonton, AB – and has selected a mix of veteran and youth players to take on the world.

“Today marks the culmination of three years of dedicated work from the team and we are pleased with the final selection,” said Herdman. “After the Olympics, we challenged the players to shed an old skin and strive to be even better as a team, and as individuals. They all committed wholeheartedly to this vision and competition for each position was fierce. Ultimately, we feel that this group of 23 makes us the best team we can be across our four corners of the game. They fully deserve this honour.”

Captain Christine Sinclair and her 153 international goals for Canada will lead the team as Canada plays out of Group A alongside China PR, the Netherlands, and New Zealand.

She’s joined by a number of players who were part of the Bronze Medal winning team from the 2012 London Olympic Games. A veteran spine of the team that includes goalkeeper Erin McLeod, midfielders Diana Matheson, Desiree Scott and Sophie Schmidt, and forward Melissa Tancredi will be important to the team’s success.

Six players on the roster have made at least 100 international “A” appearances while six others have more than 80, including Tancredi who sits on 99 appearances to this date.

Also included in the squad is a healthy mix of youth with defender Kadeisha Buchanan, and midfielders Ashley Lawrence and Jessie Fleming all back for a second-straight FIFA competition after being members of Canada’s Women’s U-20 Team last summer at the FIFA U-20 Women’s World Cup Canada 2014.

In Fleming’s case, it will be her third FIFA competition in two years after also taking part in the FIFA U-17 Women’s World Cup Costa Rica 2014.

“We’ve got a fantastic group of players here that are ready to step up and proudly represent their country on the biggest stage,” added Herdman. “It’s now up to Canadians to show them they are not alone on this journey and that they’ve got the strength of an entire country with them.”

After the tournament’s opening game on 6 June in Edmonton, AB, Canada continues Group A play against New Zealand on 11 June at Commonwealth Stadium before heading east to wrap up the group phase of the competition against the Netherlands on 15 June at the Olympic Stadium in Montreal, QC.

Tickets for Canada’s matches at FIFA Women’s World Cup Canada 2015TM are selling fast and fans are encouraged to visit at fifa.com/canada2015 to secure theirs.