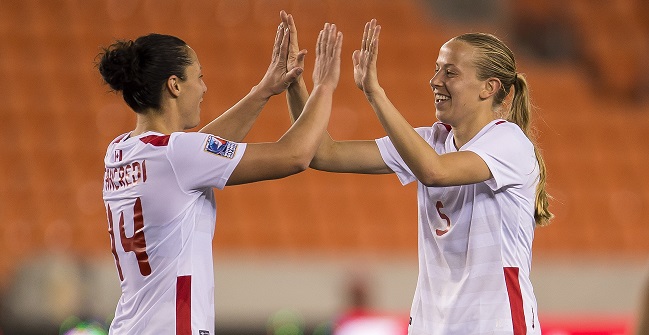 Canada one win away from Olympic berth after winning Group B

Canada beat Guatemala 10-0 in the third match of the CONCACAF Women’s Olympic Qualifying Championship, maintaining a clean sheet through all three of its group stage matches and securing its spot in the semi-finals against Costa Rica.

Playing some of the younger members of Canada’s squad against Guatemala, Head Coach John Herdman used the last group match to rest a few of the regular starters, and to give some critical minutes to finishers.

“We’ve made sure everyone is focused and on task,” Herdman said. “Every game we play for Canada is important to us and we wanted to go out there with the same sort of intensity and attitude we’ve brought to every game. We’ve had a tournament plan coming in and we’ve been able to stick to that plan in terms of players and rotations and rests, so when we get to game four, and game five, we are in the best space possible.”

Resting Sinclair, Herdman tapped veteran full back Rhian Wilkinson as captain for the match, marking her first match with the armband.

Goals came quick and steady for the Canadian side. Gabrielle Carle and Rebecca Quinn scored their first goals for Canada’s Women’s National Team. Quinn added her second and third within seven minutes of her first, becoming the fourth Canadian to score a hat trick in CONCACAF Women’s Olympic Qualifying.

“It’s a surreal feeling” said Quinn when asked about her hat trick. “It was certainly not something I was expecting when I woke up this morning.”

Later in the game, Nichelle Prince also completed a hat trick. Melissa Tancredi (who scored twice) and Janine Beckie were the other scorers of the match.

With only a one day turnaround between Canada’s last group stage match and the all-important semi-final, Herdman’s resting strategy could make a considerable difference when Canada moves into the knockout stage.

“That was always going to be the challenge,” added Herdman. “The other group is going to get a day’s extra rest and we had to put that in place for our planning. We looked at the accumulated minutes (of players) and what people can actually really recover with. The goal has always been to make sure that players were fresh for game four – players that we felt were going to have a big impact on that game – so that they are feeling fresh and ready to go. And then there will be a group ready for game five.”

Canada has been building a squad that features the experience of veteran players, and the pace that younger players bring to the game, with an eye on earning a place on the podium at this summer’s Olympic Games.

“Christine (Sinclair) has mentioned a couple of times that we’ve got some real depth in the team,” he said. “We can take pace off and add pace in, we can take technical quality off and add technical quality in; we can leave world class defenders on the bench and then bring them in. It’s a good place to be and we’ve still got a wider squad who are out there training that aren’t with us (in Houston). It’s getting better and I think it’s testament to the work we’ve put into our EXCEL system at the youth level.”

Canada will play Costa Rica on Friday 19 February at 17.30 ET / 14.30 PT in the semi-final of the 2016 CONCACAF Women’s Olympic Qualifying Championship for a spot at the Rio Olympics. This all-important match will be broadcast on Sportsnet ONE.